For reasons that seem quite plausible until you try to explain them, I've had the privilege of avoiding Melbourne's hottest-ever week and spending around eighteen days in Stockholm to learn some fancy new statistics skillz. As (very) long-time readers may know, Cindy and I have been to Stockholm before, finding it stunningly beautiful and rich in vego eating options, so I jumped at the offer.

Of course Stockholm in January is quite different to Stockholm in May, and the general darkness and chilly weather has put a curb on my outings. There have been too many nights where I've got back from my course (in the dark) at 4:30 and decided that I'm just going to get crappy take-out from somewhere very close to the place I'm staying. Having said that, I have piled on the warm gear and headed out into the city on a few occasions, and here are some highlights.

Day 1
I got in at 7am, to find all in darkness and sleet slashing down. It seems reasonable to hide in my room for a few hours but I can't afford to sleep at 9 in the morning so, when the weather clears up a bit and the day gets 'light', I walk into town and explore a little - the upside of the cold is the beauty of the freezing harbour. 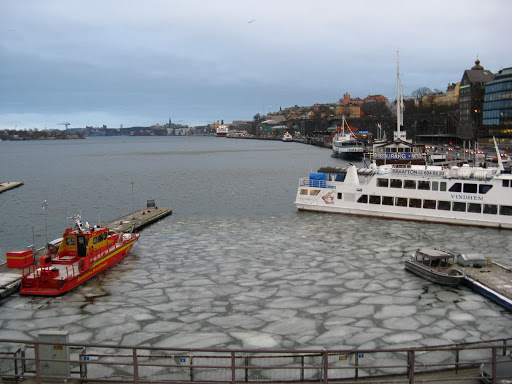 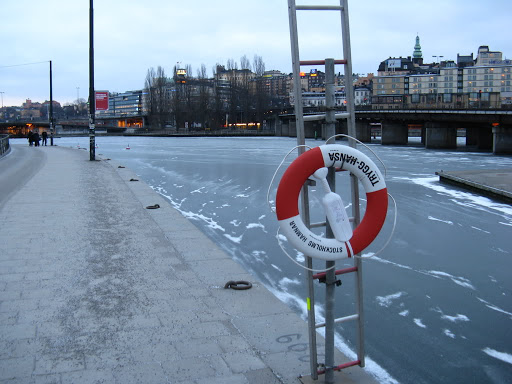 Stricken by hunger, I made my way across to Sodermalm to check out Chutney, talked up the Lonely Planet guide as hip, cheap and friendly. It was all three - the staff happily explained the menu to me in English and ladled me up a plate of bami goreng and Malaysian stew (100kr - $18, which is affordable by Swedish standards). Chutney's quite small and very popular, so I ended up sharing a table and chatting briefly to a friendly local - it was the perfect start to my Stockholm dining experience. By the time I'd eaten it was getting dark, so there was nothing left to do except flee to my room again. Dinner was a non-event thanks to my tiredness - I was out like a light by 6pm.

Day 2
Thanks to my early night, I woke up ridiculously early, and lounged around trying to cook up a plan for the day - I'd intended to get out and about and do something fun but the day started out looking very bleak and I stayed in, watched the snow and did a bit of work. Hunger again motivated me to get out, to find that the snow had worked its magic on the neighbourhood. 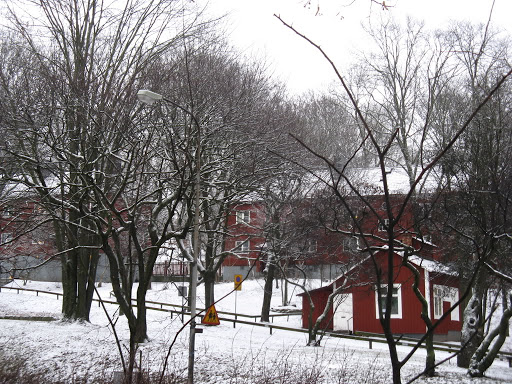 The main target of the outing was Lao Wai - rated the best vegetarian restaurant in Stockholm. The menu on the website looked exciting, but lunch is a set meal for 85kr ($15). Monday's meal was a sublime spicy tofu and 'pork' mince noodle dish and some lightly steamed vegies. Tremendous. 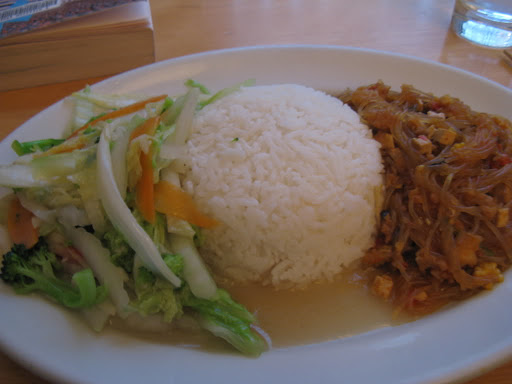 A bit more exploring was the order of the day - Kungsträgården was a sunny outdoor lunch hotspot last time we were in Stockholm. It's now an ice-skating rink. 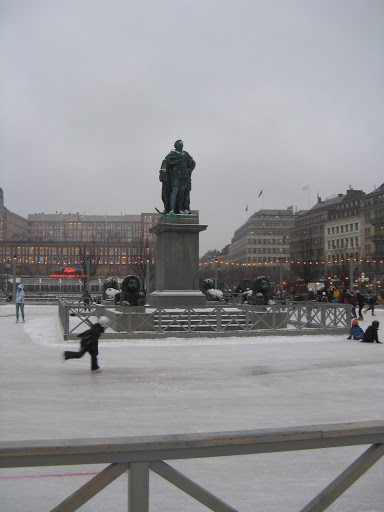 Again I let the oncoming darkness drive me back inside, but by Monday I was able to stay awake late enough to go out for dinner. To Abyssinia, just two blocks from where I'm staying. The vegetarian special (they have a vegan special too, although I think it's just the same but without the little cheese bowl) comes in at 170kr ($22), and is a massive injera plate filled with gloriously warming stews. 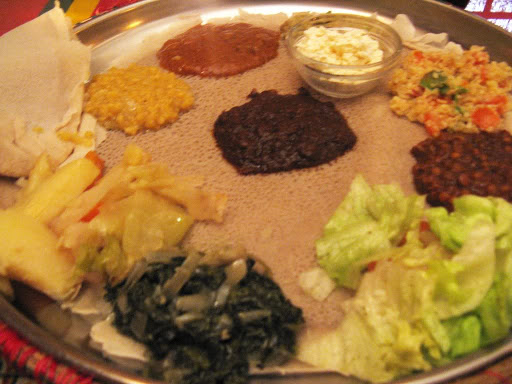 Everything was beautifully spiced - it really is perfect winter food (which is a bit weird when you think about Ethiopia). The woman running the place was friendly and enthusiastic and, like almost everyone in Stockholm it seems, fluent in English. I staggered home stuffed with food and ready for bed - even though it had been dark for hours, it was still only 8pm.

Day 3
Tuesday was the first day of my course, so the morning was spent meeting people and the afternoon was spent learning. Lunch was passable but unphotographed Thai food from nearby. This was the worst jetlag day yet - by the end of the afternoon I was semi-concious, having cold sweats and feeling strange in the stomach. Thus dinner (at 5:30) was a couple of apples and a lie down. I think the early darkness makes it much, much harder to shake off jetlag - this trip is easily the worst bout I've had, and I think nightfall at 4pm makes it doubly hard for your body to adjust.

Day 4
Wednesday was split between working (when it was dark) and walking (when it was light). The main goal was to get out to Djurgarden and see if any birds stick around through winter - turns out that a few do: nuthatches, blue tits and great tits were everywhere, along with blackbirds and fieldfares. An obliging green woodpecker was the highlight of the walk, which ended with a nice stroll along the waterfront looking back across to the city. 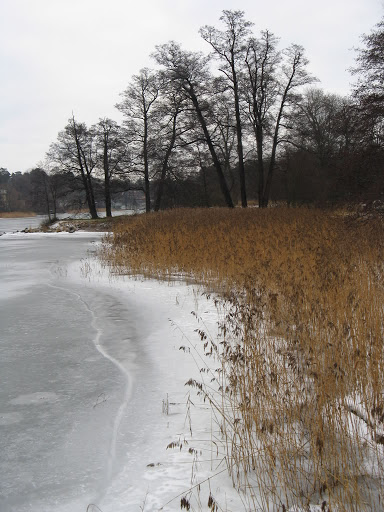 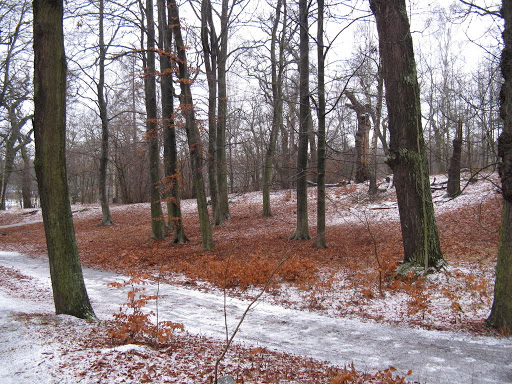 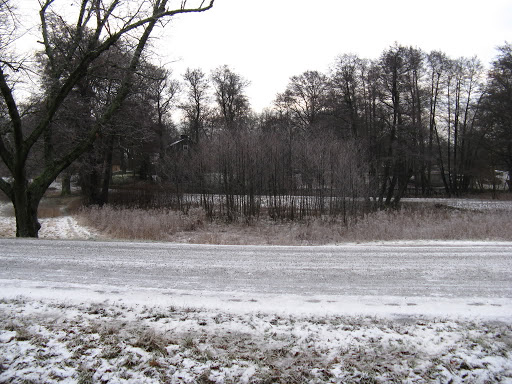 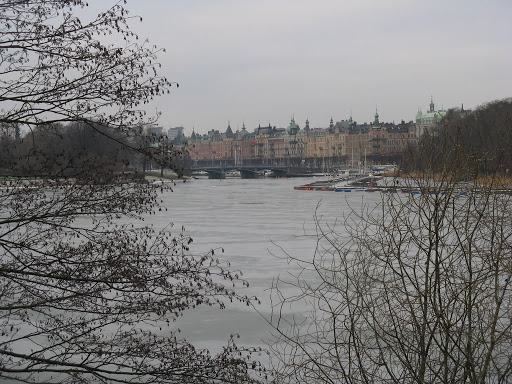 More wandering in the afternoon - this time around Brunnsviken, a lake that's between the place I'm staying and the main university campus. 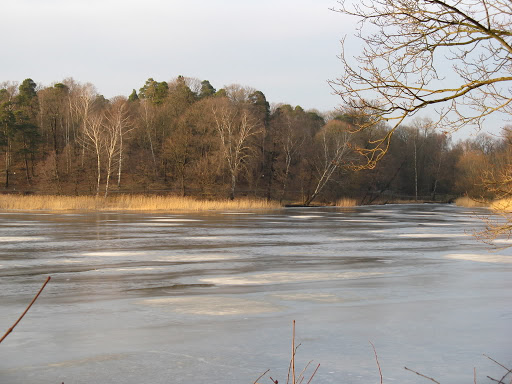 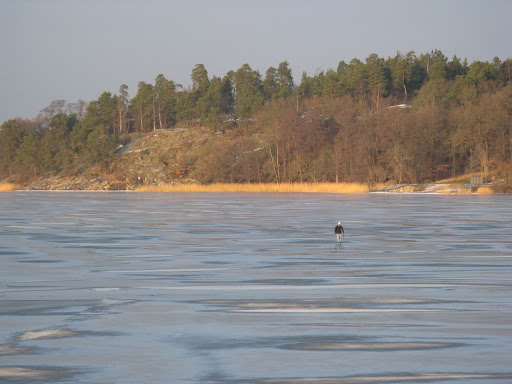 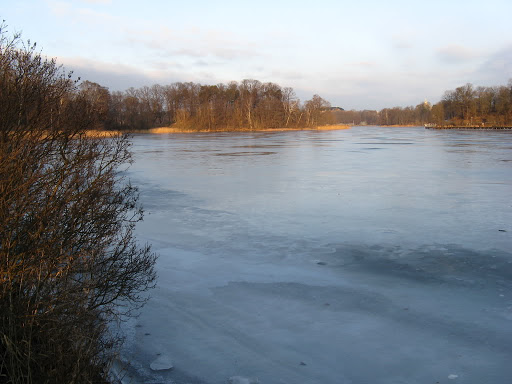 Dinner was an un-blog-worthy stir-fry that I made myself to make sure I was eating some fresh vegies amongst all the dining out.

Day 5
Another work/course day, with little in the way of adventure. For dinner I attempted to return to Lao Wei to sample the evening menu, but they were booked out. Luckily I stumbled across Restaurang Malaysia, a success from our previous visit. It's a Malaysian restaurant with a substantial vegetarian menu and the 'chicken' curry, although poorly photographed, was outstanding. 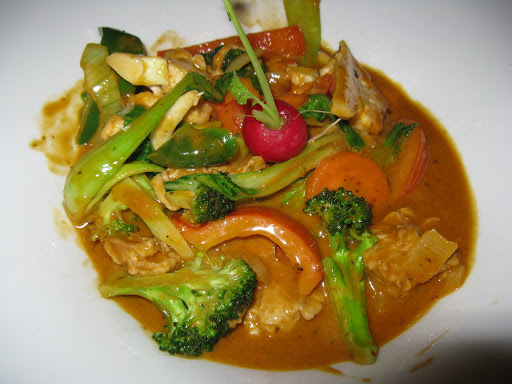 Day 6
Working again - in winter a regular worker would spend months leaving for work in the dark and coming home in the dark. Not fun. I spent Friday evening at a wonderful dinner hosted by a colleague here - vegetarians were extremely well catered for, and I was introduced to vegetarian caviar for the first time. Weird. Weird but good.

Day 7
The weekend dawned miserably and sleety, but I couldn't waste another day lazing around inside. So I jumped on a bus across to Sodermalm to revisit Hermans. The view wasn't quite as spectacular as our first trip (with the foggy rain you could barely see across the water), but the food was much the same - a buffet with a few hot dishes and an amazing array of salads. The stews were a bit interchangeable but the felafel balls were amazing and the spiced potatoes were to die for. 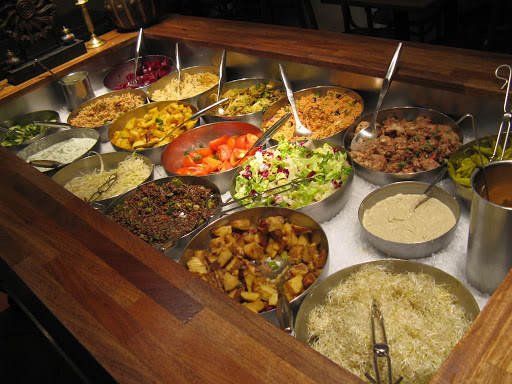 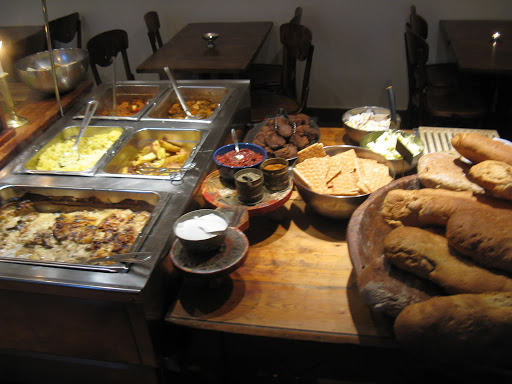 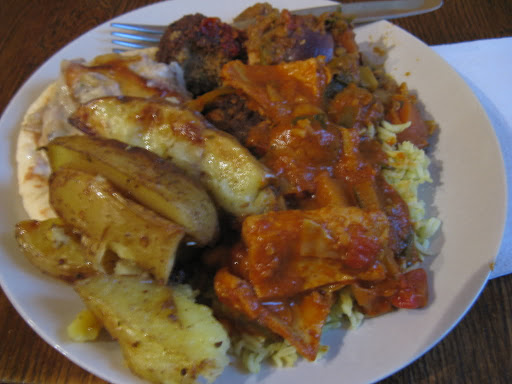 I hardly touched the salad - it was really a hot food kind of day. 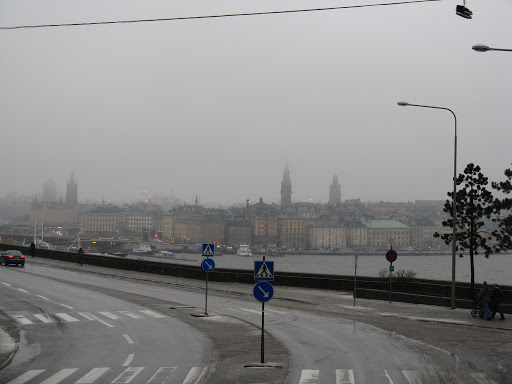 Lunch was followed with a stroll around the Stadmusem and then a wander up to Mariakirken before heading home to lie around and eat a lazy Patak's curry. 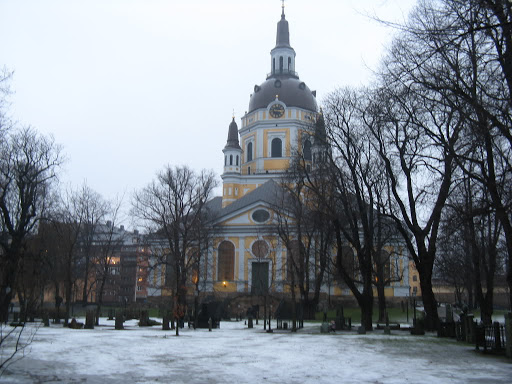 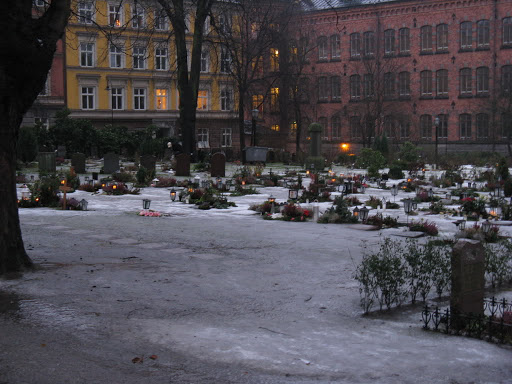 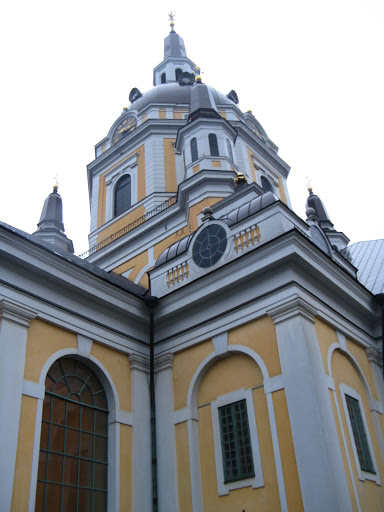 Day 8
A shamefully lazy Sunday. Lots of lazing around and some takeaway Indian were all that took place.

That's probably a good place to end this first installment - a week of crippling jetlag, laziness in the face of bad weather and some damn fine eating. Stay tuned for more in a little while.
Posted by Michael at 3:01 am