While we were keeping cool in this cafe on Melbourne's hottest-recorded day (46°C/115°F!), another even less enviable record was broken - rural Victoria was hit by the most damaging bushfires on record in Australia. Many, many lives and homes have been lost and it's not over yet. Please make a donation, if you can, to the Australian Red Cross response. 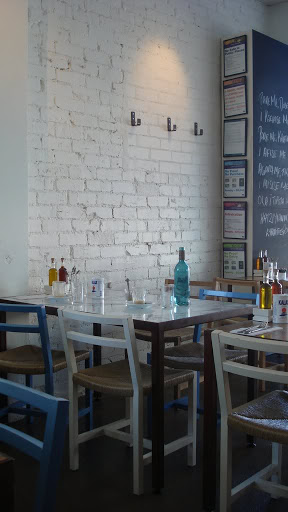 After arriving home from Stockholm late on Friday night, Michael was keen to get back into the swing of Melbourne and suggested eating out for breakfast on Saturday morning. With the temperature already in the mid-30s, we took the lazy (but cool) tram north to Hellenic Republic. Inside, it was barely recognisable from our previous visit - where once there was a crowded and cacophonous room, dimly lit, now only a handful of tables were occupied in a space streaming with light.
Perhaps it's just as well - Hellenic Republic has only a modestly sized espresso machine and they just barely kept up with the higher morning demand for coffee. It's no problem for caffeine-free me, of course - I happily slugged down water as I checked out the menu of twelve items before us. Eight or nine of them appear to be vegetarian, though probably none are vegan - this is a feast of feta, yoghurt and eggs, if not meat. 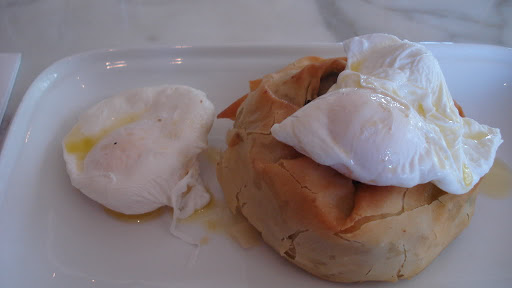 Michael happily surrendered, ordering the spanakopita with poached free range eggs ($12.50). The eggs were perfectly poached and the spinach pie was more enjoyable than last time we tried it - though he relished every bite, Michael was equally conscious of what an unbalanced meal it made. (It's worth noting that there's no list of add-ins on this menu, so requesting a side of vegetables wasn't an obvious tactic.) 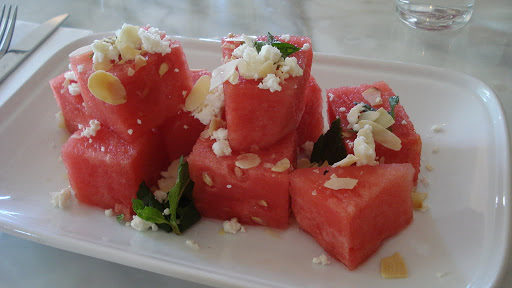 Mindful of the heat, I skipped past the sweet trahana and tried the salad of watermelon, feta, almonds, mint and rose syrup ($8.50). As I pictured hefty chunks of salty feta, I considered this a bit of a gamble, but my bet paid off - the juicy watermelon chunks were augmented with just a sprinkling of creamy feta crumbs. With that minty top note and undertone of roasted almond flakes, I neither noticed nor wished for more of the rose syrup I'd been promised. This was a prince among fruit salads!

Hellenic Republic by day is a different but equal prospect to Hellenic Republic by night. Our bill was no larger than what we'd rack up at any other cafe in the neighbourhood; though the portions were modest, they were satisfying and impeccably executed. And for now, at least, there seems to be no wait for a table; only for coffee!

(You can read about our previous visit to Hellenic Republic here.)