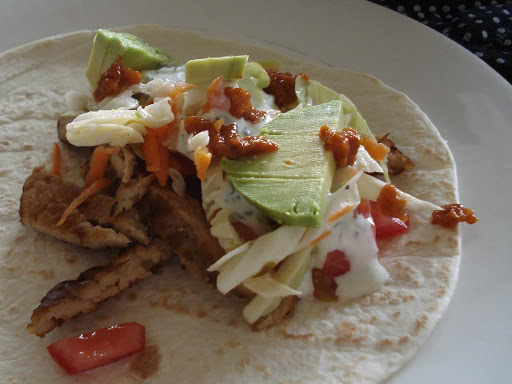 The last week of January was not one for cooking. With a string of record-breakingly hot days and only myself to feed, I nipped into the kitchen only long enough to fetch crackers and cheese, fruit, or my umpteenth refill of iced water. By the weekend I was ready for cooking and company so I offered a vaguely Mexican-themed Sunday night meal to Mike, Jo, Marty and Alana. They responded enthusiastically with beer (some with chilli!) and in Jo's case, white wine sangria.
On Saturday morning I picked out some recipes and hit the markets. Beer-marinated tempeh, coleslaw, black beans, lime-yoghurt sauce and smokin' hot chipotle-onion sauce; all taken from Veganomicon. I was able to prepare almost everything in advance, just frying the tempeh, reheating the beans and chopping up the fresh stuff while my guests crunched on corn chips.

So, let's take it from the top with my latest love, tempeh. Unfortunately, this incarnation was merely meh. Though my tempeh had marinated for hours in a potent mix of beer, lime juice, soy sauce and spices, the freshly fried strips tasted of tempeh, nothing more. They still made a pleasant and mild taco filling, but I suspect I could achieve the same effect by just stir-frying the strips in a little peanut oil.
Its accompaniments fared better. The coleslaw seemed an odd choice and I was a little apprehensive that the other eaters might avoid it. (Let's face it, vegetables don't get much less cool than cabbage.) Yet it won the first favourable remark! To be fair, this recipe is no mayonnaise mush - the shredded cabbage and carrot are dressed more elegantly in apple cider vinegar, a couple of minced pickled jalapenos, and some salt and pepper.
The evening's cooling condiment was the lime crema. All it takes is plain yoghurt (soy for the vegan version), a handful of coriander, the juice of a lime, a dash of salt, and a hearty whizz in the food processor. Only the most committed coriander-hater could turn up their nose at this one. 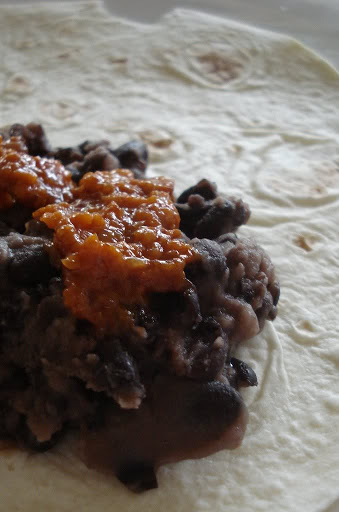 These black beans were the first dish to be completely gobbled up; their flavour belies their simplicity. To make them, you bring two drained cans of black beans, 3 cups of water, a halved onion and 2 bay leaves to boil. Let 'em simmer for 40 minutes, fish out the onion and bay leaves and you're done! Actually I found that my beans didn't want to break down at all, so I gave them an encouraging little mash to get the thicker consistency you see above.
Isa and Terry must be made of sterner stuff than I; there is no way I could handle this quantity of smokin' chipotle-onion sauce on such a modest serve of black beans. Even so, it's a gem of a recipe (I've included it below) - smoky, savoury and super-spicy - and we all gleefully spooned it onto our tortillas, some with heavier hands than others.

Even with a little hiccup or two and a couple of tweaks on my part, it's those Veganomiconers who deserve mad props for another stellar line-up of savoury dishes. Methinks it's time to start trialling those cookies and desserts tucked away at the back of this book.

Put the onion, garlic and olive oil in a small saucepan over medium heat. Cook them, stirring occasionally to prevent the onion from sticking, until the onion is very soft, about 10 minutes. Add the chipotles and adobo sauce, stir through thoroughly, and cook for just 30 seconds more. Allow the sauce to cool, then whizz it briefly in a food processor to obtain a chunky sauce.
Posted by Cindy at 10:03 am