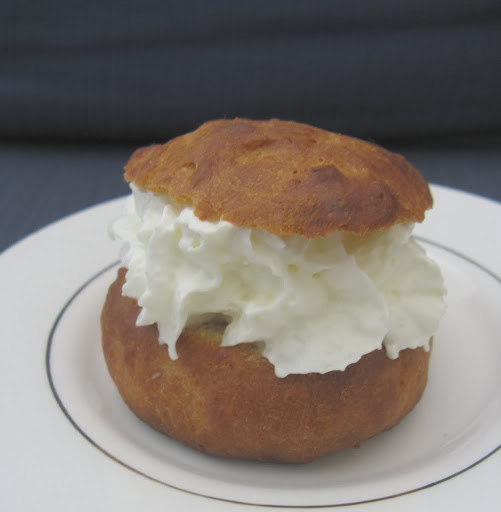 When Michael ate a semla on his recent trip to Sweden, I was reminded of the similar bun that a student visiting from Sweden baked for a few of us classmates back when we were undergrads. Then Hayley, in her comment on Michael's post, planted the devilish idea in my mind that I could, nay should, try baking these for myself. And so I did, picking the weekend closest to Shrove Tuesday; apparently they're most closely associated with this day, which is tellingly called Fat Tuesday in that part of the world. Much like hot cross buns they're actually available for purchase from just after Christmas, right through until Easter. I shared the buns on a Tropfest picnic, where we were happily and unexpectedly accompanied by a Norwegian (as well as our friend Marty), and she told me more about authentic semlor.
Semlor begin with a yeast bun, lightly spiced with cardamom. Traditional recipes seem to use fresh yeast, which I was reluctant to buy, so I hunted down one that involved dry yeast. It included baking powder as well, which our Norwegian companion and I agreed was weird. The buns didn't turn out quite as they were supposed to - NC astutely observed that they were more like scones than yeast buns. (The one pictured above is a little overcooked, too - my second and third trayfuls were a more appropriate pastel shade.) 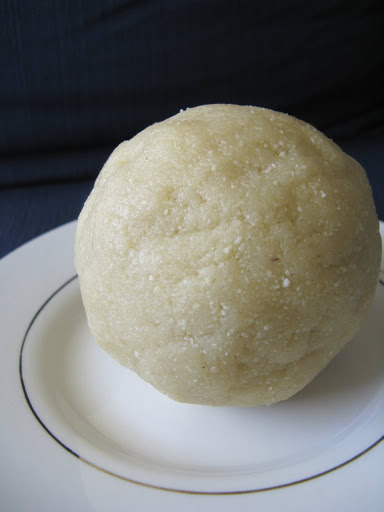 The next key ingredient is almond paste. After poking around further on the internet, I deduced that ready-made almond paste is expensive and difficult to find, while it's not too difficult to make yourself. I think it's traditionally made mostly of blanched sweet almonds and sugar, with a small number of bitter almonds added to the mix; instead I made a small quantity of this recipe, simply throwing some blanched almonds and sugar into a food processor, adding a touch of almond essence, and pouring in just enough egg white to pull the mixture together into a firm ball. Though I'm no a marzipan lover, I definitely took a shine to this softer, sweeter version. NC seemed quite taken with it, too, and was quite tickled that I made it easily in a food processor - apparently her mother uses a much more laborious and traditional hand grinder.
This sturdy block of almond paste doesn't go in quite as is - instead you hollow out the semlor, mix the crumbs with grated almond paste, and add just enough milk to achieve a porridge-like consistency. It probably doesn't sound especially appetising but once spooned back into the hollow, the semla becomes softer and sweeter - this is the step that makes it special, in my opinion.
However, that's not almond paste you see holding up the semla lid in the top picture - these buns become the ultimate indulgence when freshly whipped cream is piped over the almond filling. What with the picnic and my hatred of piping, this wasn't a practical approach and I resorted to something I'm not proud of...

Supermarket-purchased aerosol-propelled cream. Shudder. This one was unsweetened, at least, and offered that frilled border I couldn't otherwise create. Most important of all, it was easily transported on our picnic. It deflates faster than a souffle, however, so it really does need to be applied at the last minute. (What on earth am I going to do with the leftovers - any ideas?)
Semlor should be finished off with a dusting of icing sugar, but again this wasn't realistic for a picnic. The recipe below outlines the steps I took in creating these but since they were far from the quintessence of Swedish semlor, you'd do well to read around before baking your own. This blog post, written by a resident of Helsinki, is a great starting point. 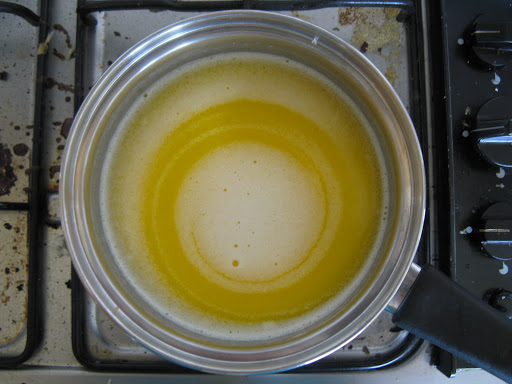 Semlor
(based on semla and almond paste recipes submitted to allrecipes.com)

Gently melt the butter in a small saucepan. Turn off the heat and stir through the first measure of milk. When the mixture is not too hot, whisk in the eggs. Transfer the mixture to a large bowl. When it's lukewarm, sprinkle over the yeast and allow it to develop for 5 minutes.
In a separate bowl, sift together the first measures of flour and castor sugar, the salt and cardamom. When the yeasted mixture is ready, stir through these dry ingredients to form a soft dough. Cover the bowl with a damp teatowel and leave it to rise in a warm place for about 30 minutes.
This is a good time to make the almond paste. Place the blanched almonds, the second measure of castor sugar and the first measure of icing sugar into a food processor. Whizz them up until the almonds are ground to a coarse powder. Add a few drops of almond essence (to your preference, it can be overwhelming stuff!) and just a little egg white. Process again, adding just enough egg white so that the almond mixture begins to stick together. Turn the almond paste onto a bench or into a large bowl, and use your hands to press it together into a firm ball. Wrap the ball in plastic (or pop it in an airtight container) and store it in the refrigerator.
Return to the bun dough! Start by sifting together the second measure of flour and the baking powder. Pour it over the risen dough and stir it through - this is difficult work. Turn the lot onto a bench and knead it until the dough is smooth. Divide the dough into 24 pieces of equal size, form them into balls, and place them on greased baking trays, leaving some space between the balls. Cover them with damp teatowels and let them rise for another 35 to 40 minutes. During this time, preheat the oven to 190°C.

When the oven is ready, bake the buns for 10 to 15 minutes, until they are cooked through and just starting to colour. (Note that the bun pictured up top is over-cooked!) Transfer the buns to a wire rack to cool.

Slice a thin lid off the top of each bun and hollow out the bun centres with a small knife, spoon, and/or your fingers. Crumble up the bun middles in a bowl, and grate over the almond paste. Stir them together, then add just enough milk to achieve a porridge-like consistency. Spoon the almond filling back into the buns.

When you're ready to serve the buns, pipe whipped cream over the almond filling and replace the bun lids; shower them with icing sugar through a sieve and serve.
Posted by Cindy at 8:40 am