Some months back Cindy, Jo, Mike and I sampled the delights of Cafe Vue's friday night cocktail extravaganza, rescuing Cindy's mood in the process. We decided it was time to revisit, and February's Roaring Twenties theme seemed like it was bound to hit the spot. So, with no particular stresses or disasters to counter we returned to see how much we enjoyed it without the drama of flight delays to ramp up the tension.

Once again, we faced five courses and five cocktails, with the vego side of the table were treated to a mix of dishes from Vue de Monde proper and variations on the meaty options from the Cafe's set menu. First up, an unphotographed course (we weren't even five cocktails deep yet!) that involved a ravioli type construction, made of ricotta wrapped in a mozarella skin, with tomato confit, baby basil shoots, parmesan with dehydrated olives and an olive reduction and bits of crostini poking out like spears. The mozzarella skin was a slightly strange texture as a wrapping, but the flavours were excellently combined.

For our first drink we were served up a Twentieth Century (wikipedia suggests that Cafe Vue didn't do their research - this cocktail first appeared in the late 1930s - roaring twenties indeed). It includes lemon juice, gin, some sweet white wine and a bit of creme de cacao. It's named after a famous art-deco style locomotive, and the sleek flavours of the creme de cacao and sweet wine provided the style while the gin supplied the engine. Yum. 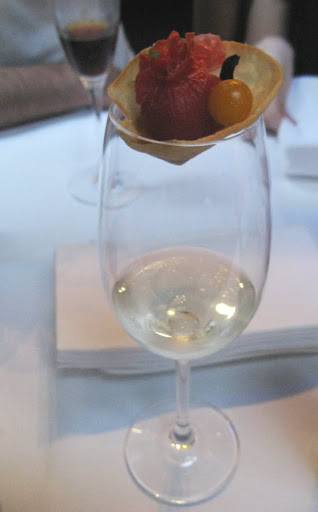 Next up food-wise was something that looked suspiciously like another cocktail. After being assured that the waitstaff weren't trying to fool us into more booze, we were given the complete run-down: the bottom of the glass was a tomato consomme, while the decoration on top included tomato fondue, confit tomato, cherry tomato, dehydrated olive and some basil shoots. My well-known tomato issues meant this wasn't really to my taste, but I was impressed by the idea and presentation. Cindy, however, was liked it a lot - it was her favourite savoury of the night. 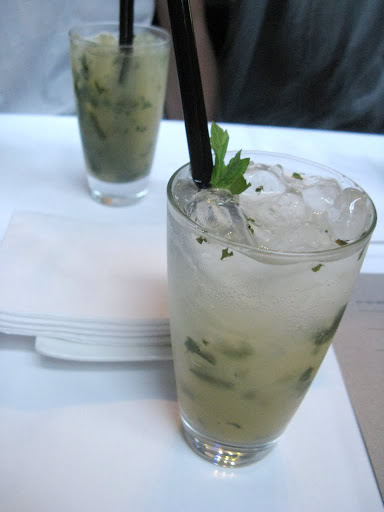 Our second drink the more thematically appropriate mint julep, with Cafe Vue's own twist: they took the standard mint, bourban and soda, but cut down on the amount of soda and mixed in cloudy apple juice rather than sugar. I liked the sweetness of the apple juice rubbing up against the smokey bourbon and minty mint, but Cindy was less enamoured. 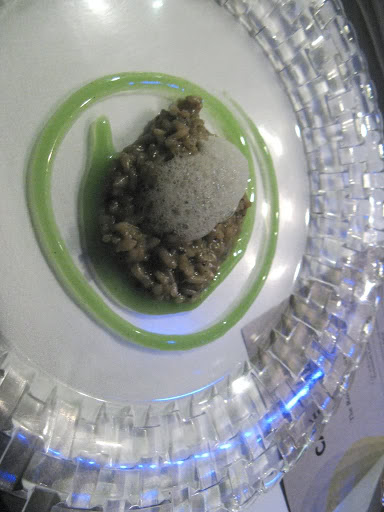 While the other two were dealing with a dish disgustingly titled 'pork and bacon floater', Cindy and I were served up the same mushroom risotto as we'd sampled last time - right down to the tarragon emulsion. This dish is all about the strong mushroom flavours and, while we were a little disappointed to get a repeat offering, it's an excellent example of a fairly common vego dish.

The first few drinks had kicked in by now, and conversation was spiralling out of control, leaving Cindy distractedly slurping down half of her cocktail before remembering to pull out the camera. 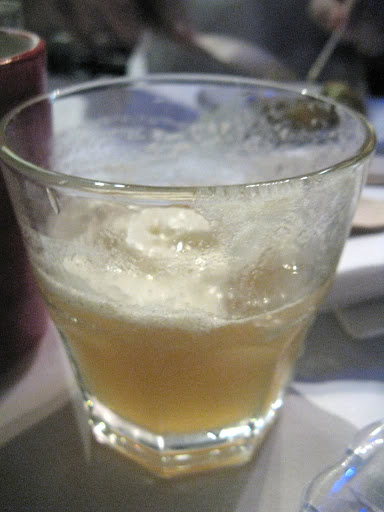 This delicious concoction was a Bohemian (that has a mysterious provenance - google at least provides little enlightenment): aniseed bitters, bourbon, lemon juice and maple syrup foam. It had a tremendous bittersweet flavour, with the foam a particularly successful inclusion.

Our fourth course took us a step towards dessert with a cheese plate: fancy cheddar, fancier pickles and some sort of fancy rye bread. In short: it was pretty fancy. Everyone knows how well cheese and pickles work together, so just imagine a top quality combination of the two. 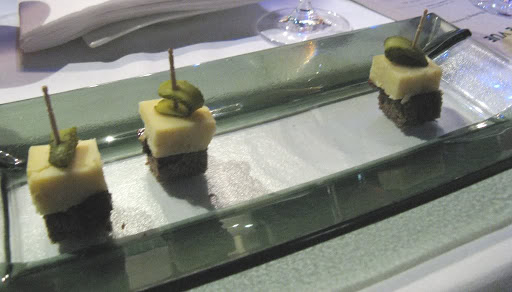 To wash down the cheese: a six-penny crank, traditionally gin, lemon juice, sugar and beer. Cafe Vue went with a much different recipe - whisky, French red wine, Italian bitters and some sort of elderflower liqueur. 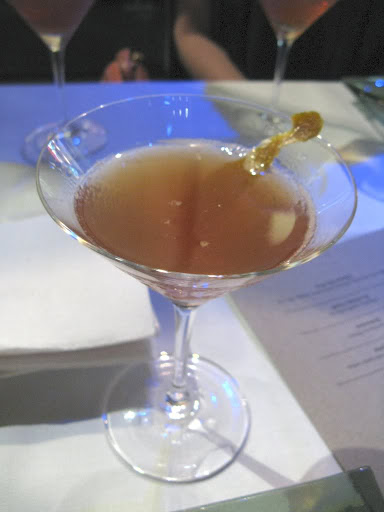 This was a punchy cocktail - probably the booziest of the night. I didn't get a strong taste of elderflower, it may have been overwhelmed by the bitters. Still, I have vaguely pleasant memories of this drink (full disclosure: I had some post-work drinks pre-cocktails, so I may not have been carefully savouring things by this stage).

Onto dessert! Another cocktail-shaped course: orange segments, chocolate biscuit pieces, chocolate and vanilla foam in the bottom of a tall glass with a chocolate disc on top decorated with a few sprigs of basil. The waitress places the glass on the table and then carefully pours a warm orange-infused olive oil on top so that it melts its way through the disc and into the cup. Amazing. 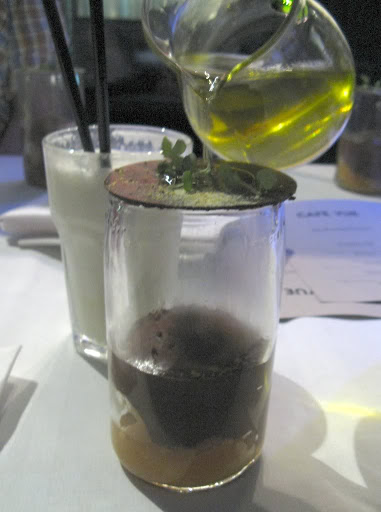 To go along with it, the best cocktail of the night: a Ramos gin fizz: gin, lemon juice, orange blossom water, eggwhite, cream and soda water all smashed together in a food processor. This had an amazing creamy texture, and was full of citrussy goodness - so good we tried (and failed) to replicate it over the weekend. 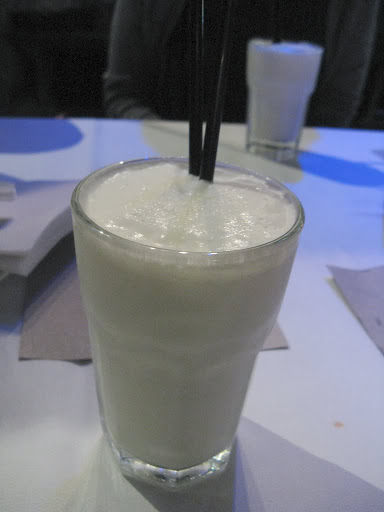 There was nothing wrong with Cafe Vue's performance this time, but I think the added drama of Cindy's late arrival and general stress levels made the first time a little more thrilling. Even so, five fantastic cocktails and five inventive and delicious little courses is incredible value, though the price seems to have crept up to $77 per person. The theme changes each month so we'll probably go back to try another variant in the future. Be warned: you'll need to book, and book early.

(Read about our previous visit to the Cafe Vue cocktail evening here.)
Posted by Michael at 6:54 pm