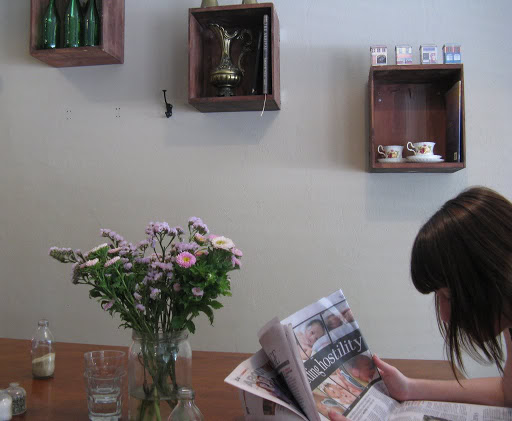 Cindy and I first stumbled across Min Lokal in an attempt to locate Wild Flour bakery and I was instantly smitten. Ever since I've held their baked eggs up as some sort of paragon of eggy goodness, finding fault with every other cafe that tries to compete. I eventually snuck back one afternoon to make sure that my memory wasn't deceiving me and was once again overwhelmed by the quality of the brekkies. So when we met Mike and Jo and some friends at Ici to be confronted by a long wait for a table, I dragged everyone around the corner to sample the delights at this unassuming little place.

Things have changed a little since we first visited - they've got the freezer situation sorted out, so iced coffees are on the menu, and they've greatly expanded their menu including the addition of something sweet: waffles (more on them later). The claypots remain, with two vego options and a meaty alternative. I went for the Adafina claypot ($14): baked eggs with pumpkin, green olive paste (and a few half olives), harissa, saffron, green beans and toast. 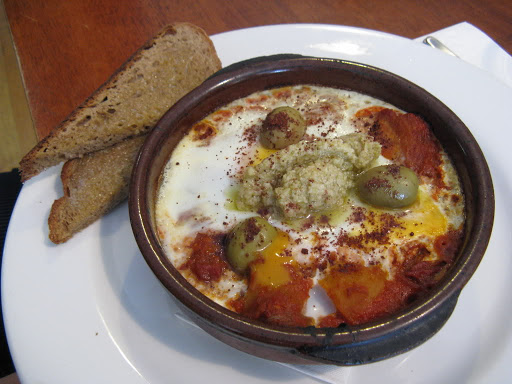 Mmmmm. Look at that deliciousness. A great mix of flavours, with the olive and harrissa flavours packing the real punch, while the eggs and pumpkin added a bit of heartiness. The eggs were cooked perfectly again, and the toast was ripe for the dunking. I could have eaten two.

Cindy was very excited to spy the waffles ($13) on the menu, after being reduced to ordering toast the first time we visited. The menu promised balsamic strawberries and grapes, vanilla mascarpone and pistachios alongside. It wasn't the biggest serve of sweetness, but it was an impressive breakfast nonetheless - Cindy complained about the relatively small serve of fruit, but was wowed by the waffles themselves and the combination of colours and flavours. 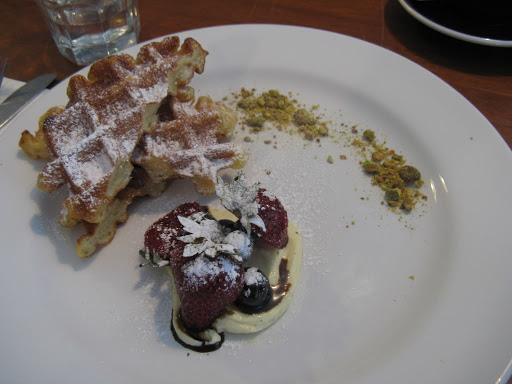 The other folks at our table avoided the baked eggs and opted for pan-fried haloumi or the aforementioned waffles - everything except the eggs was a little on the small side, but it all seemed to hit the spot.

We've tried a few times to hit Min Lokal on the weekend and been overwhelmed by crowds - for some reason we walked straight into a table this week, but I think it's always going to be a bit of a gamble. So if you're keen for a fine breakfast, but not so hungry you won't be put off by a wait, Min Lokal is my pick of the Fitzroy breakfast scene.

(You can read about our first visit to Min Lokal here.)
Posted by Michael at 3:00 pm