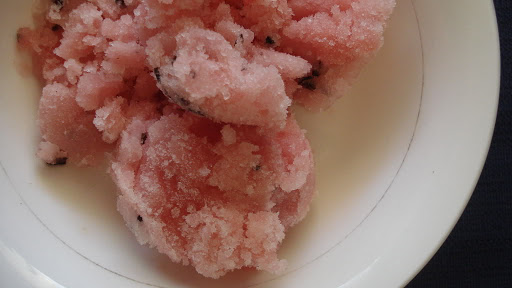 I was hardly going to invite people over for dinner without offering dessert, and this spate of hot weather called for sorbet. It's been years since I've tried to churn up a sorbet, even though perfecting lemon sorbet was one of my main aims when I initially bought an icecream maker. Back then I experimented many times with different quantities of lemon juice, sugar syrup, and soaking lemon rind but never did I get the taste and texture right simultaneously - often I failed on both counts!
If anyone could help, I figured, it would be David Lebovitz. Before travelling to the markets on Saturday morning I flipped through the sorbet section of The Perfect Scoop, making notes on all the fruity concoctions that might be seasonal. It was a long shopping list: "Buy 1kg cherries 1 lemon OR 8 limes OR 6 lemons OR 8 plums 1 punnet raspberries OR..." When I spotted the watermelons in the organic section of the markets I was sold, regardless of the (steep!) price of the lime I'd also need to churn up Lebovitz's watermelon sorbet. It's accompanied in the book by an irresistibly cute picture - the sorbet has been frozen into iceblock molds, and what looks like the melon's black seeds scattered throughout the sorbet are actually miniature choc chips.
Now choc chips are another blemish on my record of icecream making. When frozen, they don't taste like much, and I've never found a brand or technique that overcomes this. I half-heartedly checked out a couple of shops for mini choc chips but found only coloured sugar-coated ones; all I was after was a tablespoon or so of the critters anyway. Then I remembered the half-cup of cocoa nibs still in the pantry and decided to give them a go. They looked sadly like broken shards of watermelon seed stirred through the sorbet and my first experimental taste was more grit than flavour. But, ultimately, they really worked in this sorbet; the cocoa flavour asserted itself well through the cold.
Other than these seed substitutes, the watermelon is augmented with lime, vodka and, of course, sugar. Yet none of these ingredients really stand out; they just serve to heighten the watermelonyness of it all. And that's all you need. Well, that and the occasional crunchy hit of cocoa, nib-style.

Cut the rind away from the watermelon, slice it into large chunks, and do your best to pick out the seeds. In two or three shifts, puree the watermelon in a food processor. Though David didn't mention it, I then strained the watermelon, pushing out as much liquid as I could, and discarded the seed-riddled pulp. (But try retaining the pulp and tell me what the sorbet's like!) Either way you're after about 3 cups of juice.

Put 1/2 cup of the juice in a small saucepan with the sugar and salt and warm the mixture, stirring, until the sugar's completely dissolved. Take the sugar syrup off the heat and stir it back into the rest of the watermelon juice. Add the lime juice and vodka, and refrigerate the mixture until it's very cold.

Churn the sorbet in an ice-cream maker, adding the cocoa nibs just a minute before switching it off.
Posted by Cindy at 6:17 pm