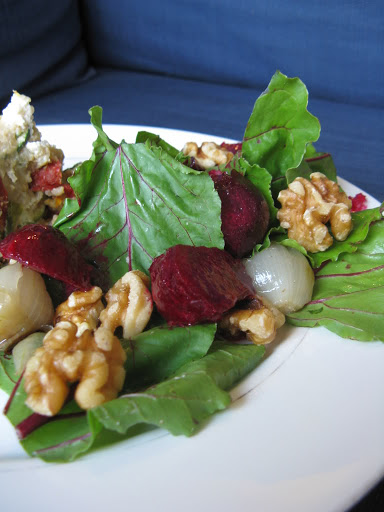 Though a handful of green leaves might be enough to transform a slab of risotto cake into a meal, this was a weekend meal and I was willing to go further than that. I flipped through the Salads section of Vegie Food, created a shortlist and asked Michael to make the final decision; he chose this roasted beetroot salad. It's actually written as a double-beet, double-onion salad, featuring the oft-neglected beet leaves as well roots and a pungent dose of garlic cloves and French shallots.
Our salad didn't quite work out like that; we blindly followed the suggested roasting times to disastrous effect. You know how you can roast garlic until the cloves are sweet and squishy and spreadable? I think we were aiming for a stage just before that, where the cloves are soft and sweet but still hold together when peeled. Instead we learned that after the squishy stage, garlic cloves re-harden and eventually they covert to little rock-like chunks of blackened coal. Whoops. Thankfully the French shallots were a made of tougher stuff and we were able to peel off a couple of layers and make use of their sweet, tender centres.
Regardless, this salad impressed us both. The bitter leaves are well offset by the sweet beetroots and shallots, and the single fresh garlic clove in the tangy mustard dressing made quite an impact - I didn't miss the other 12 roasted cloves at all! Adding the walnuts for crunch, this salad has all the variety in flavour, texture and colour you could ask for in a side dish. It's a little fiddly and time-consuming as salads go but I don't think that'll deter us from making this again - we'll just set the oven timer a lot earlier next time.

Roasted beetroot salad
(based on a recipe from Vegie Food)

Preheat the oven to 200°C. Roast the shallots, beetroot and 12 of the garlic cloves, leaving all their skins on, until tender. The recipe recommends 1 hour for the shallots and garlic, 1 1/2 hours for the beetroots, but they could take a lot less time - check them regularly. Allow the vegetables to cool slightly, then gently peel them; slice the beetroot into large chunks.
Mince the one remaining clove of garlic. In a small bowl, whisk it together the vinegar, mustard, and walnut/macadamia oil; season the dressing with salt and pepper. Toss the beetroot chunks through the dressing and give them a few minutes to soak up the flavours.

Arrange the beetroot leaves, shallots, garlic, and walnuts on plates or in a salad bowl. Spoon in the beetroot chunks, then drizzle over the dressing.
Posted by Cindy at 9:24 am