WARNING: Some viewers may find the following image disturbing. Yes, that's mock duck meat. In a can. I bought it for little more than a dollar at the local IGA, dizzy with the opportunity to eat more things Michael would probably disapprove of. This time, though, I couldn't help wondering if this was something I should disapprove of myself. But looking at the label, I read only ingredients I recognised - gluten, soy sauce, sugar, salt and soy bean oil. 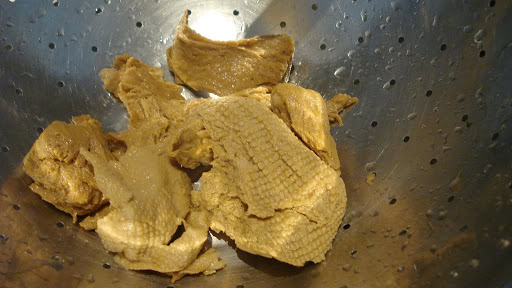 What came out of the can bore more resemblance to a rubber chicken than a feathered or fleshy bird. It proved not to be as rubbery as I feared when I sliced it, the texture akin to the seitan I've occasionally bought from health food shops. 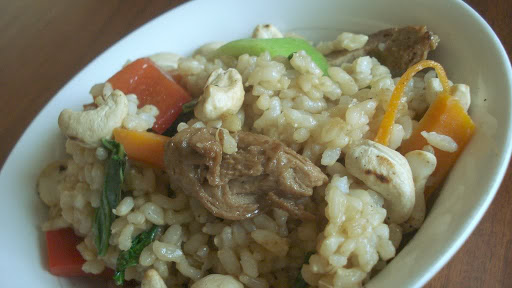 As a strategy to ensure I wouldn't go hungry, I trialled the mock duck as a component of my usual fried brown rice. I omitted the fried egg and rapidly stir-fried the mock duck in a little sesame oil and a lot of Chinese five spice, setting it aside as I cooked the vegetables and rice and stirring it through at the end.
And you know what? It wasn't bad, not bad at all. Not as succulent as some of the mock meats I've enjoyed from other Asian supermarkets and restaurants, but completely servicable as a supporting player in the meal. I might even try sneaking it into Michael's rice sometime!
Posted by Cindy at 2:12 pm