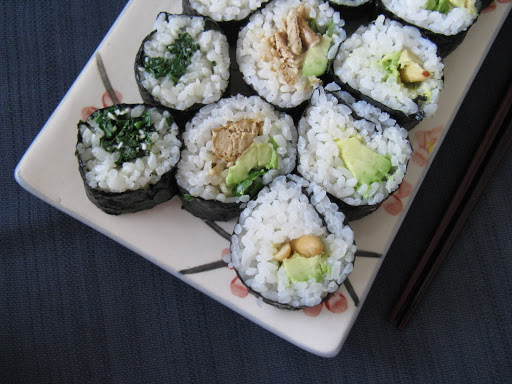 OK, so they're probably not the most elegant sushi rolls you've ever seen, but be kind! These are Michael's and my first attempts at making our own. It's been a while - I discovered Sushi Station as a uni student and became almost instantly hooked, but once I went vegetarian they had less appeal. So much fish! (And chicken...) Since moving to Melbourne, some great Japanese restaurants have rekindled my interest in this cuisine but it took a flick through Veganomicon on Friday morning to get the nori rolling.
Veganomicon did well to reel me in - their nori rolls are one of the few recipes that win a colour photo and they feature my newly-rediscovered buddy tempeh. Throw in some avocado and sesame oil and it's difficult to imagine how they could get any better. Isa and Terry helpfully listed all the extras a sushi novice needs in a pop-out box - in addition to the recipe ingredients, we bought bamboo rolling mats (<$2 each at the supermarket!), pickled ginger, a tube of wasabi paste and a bottle of shoyu (soy sauce).
We tried three different fillings. On the left is steamed spinach, dressed with rice vinegar, sesame oil and sesame seeds. It was OK, but I think I'll mix it with other fillings in the future. On the right are elephant rolls, with avocado and roasted peanuts. This unexpected combination was unexpectedly good! I think I'll always be adding peanuts (or other nuts) to my avocado rolls in future. The centre rolls are an attempt at Veganomicon's featured filling; sadly we were unable to track down any tempeh on Friday evening (but oh, how we tried!) so we substituted marinated tofu. It's steamed and then mashed up a little with mayonnaise, sesame oil and chilli powder, before being rolled with avocado and chopped shallots. The result is outstanding! We were sneaking tastes out of the bowl, jealously guarding our own shares of the rolls and then when we ran out of rice, spooning it onto crackers.
So our rolls ain't the prettiest and they created one heck of a mess in our kitchen. But their terrific taste and novel assembly made for a fab Friday night in, one that we're bound to repeat in the future.

Combine 1 cup of sushi rice and 1 1/4 cups of water in a saucepan. Put the saucepan on high heat and bring the rice to the boil. Stir it once, lower the heat, cover the saucepan and cook the rice until it's tender and all the water is absorbed. Veganomicon estimates 20-22 minutes, but ours was perfect in just 15 minutes.

Transfer the rice to a heatproof bowl, and sprinkle over 2 tablespoons of rice vinegar and 1 teaspoon of sugar. Gently but thoroughly fold them through the rice, then cover the bowl and leave the rice to cool for 10-15 minutes. It should still be a little warmer than room temperature when you use it.

Prepare your fillings while the rice is cooking and cooling - guides for the ones we used are below.

Place a nori sheet on your bamboo mat, and spoon some rice onto the bottom two-thirds of it. It is much, much easier to smooth the rice out (aim for a layer ~0.5cm thick) using wet hands, or the back of a wet spoon. The Veganomicon folks suggest keeping a small bowl of water mixed with a little rice vinegar by your side.

Near the bottom of the roll, arrange a stripe of your filling ingredients from the left side all the way to the right. The less you use, the easier this'll be to roll, so go light on for at least the first time.

OK, let's roll! Start with the side closest to you - it should have rice on it with the filling stripe close by. Use the bamboo mat to gently but firmly roll the sushi sheet over, away from you. Try not to do what Michael first did, and get the bamboo mat caught inside the sushi layers! You'll probably have to fold the mat back towards you once the sushi coil starts overlapping with itself. When you get to the naked nori at the other end, pat it with a bit of water to create a seal.

Transfer the sushi roll to a board, and use a serrated knife to slice it into pieces ~2cm thick.

Have you made it this far? If so, then you rock! Taste one of the messy end pieces (with a dab of wasabi if you please) - hopefully it'll spur you on to finish the rest of your rolling.


Elephant roll
Slice two avocado halves into lengthwise strips, and arrange them with a tablespoon or two of roasted peanuts.


Steamed sesame spinach
Wash 150-200g of spinach and steam it until just wilted - it won't take long! Chop it up a bit, then toss it in a bowl with 1 teaspoon sesame oil, 1 tablespoon sesame seeds, and a splash of rice vinegar.


Spicy tempeh (or tofu)
Steam 100g tempeh/tofu, a let it cool for about 10 minutes. Chop it roughly into cubes, and pop it into a bowl with 2 tablespoons of mayonnaise, 1 teaspoon sesame oil and chilli powder to taste. Mash it all together, but keep it chunky.

Spoon the tempeh/tofu in a line along your rice and nori, then top it with avocado strips and the sliced green part of a shallot.
Posted by Cindy at 7:26 pm