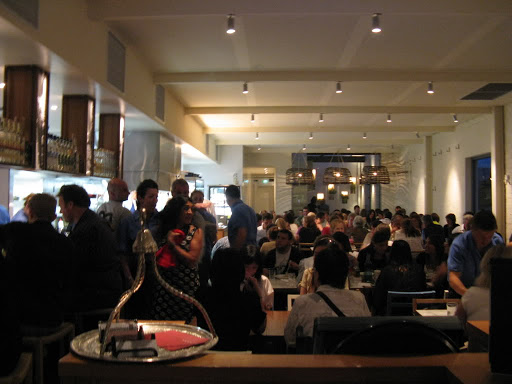 Who doesn't love Georgie Calombaris? He's bloked it up with Peter Everett on Ready Steady Cook, shilled for a fancy brand of feta and won all kinds of awards with his city restaurant The Press Club. So when word started seeping out that he had something on the go in East Brunswick, Cindy and I were very excited. It opened to stunning reviews and huge crowds, and Mike and Jo rounded us up on Thursday night so that we could try it out.
Even with a 9pm booking we were faced with a packed out venue as we arrived - it was probably closer to 9:20 when a table opened up for us. It's a nice place, all wide open space with a bar and a courtyard, but the tables are crammed a little too close together. The menu is predominantly about small plates ($7-$13.50) and we ordered roughly two each. We were pretty well satisfied, although not so much so that we couldn't fit dessert in - more about that later.
Let's start with the undoubted star of the show - the Kefalograviera Saganki served warm with peppered figs ($11.50). Honestly, I could have eaten these until my heart seized up - perfectly fried cheese with the sweet and peppery flavours somehow enhancing the saltiness of the cheese. If you've yet to sample this, stop reading this now and dash over to East Brunswick and give it a shot - it's even better than it looks. 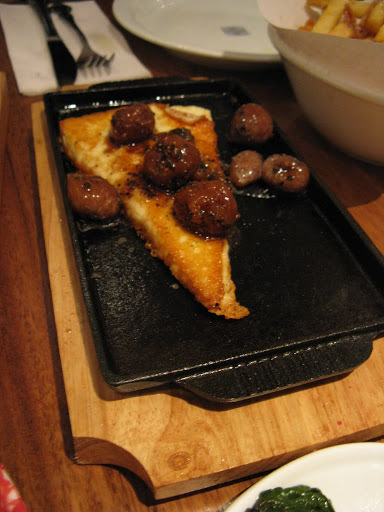 We'd also heard good things about the chips (Tiganites Patates - hand cut potatoes cooked in olive oil and seaseond with oregano, $8.50), so they were the second of our unhealthy choices. Again, they really hit the spot. They were perfectly cooked - you can almost taste the crunchiness in the photo - and the seasoning gave them something a little more interesting than just saltiness. 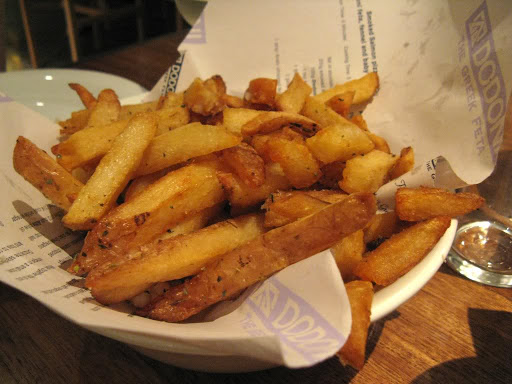 We opted for a couple of healthier plates to try to counterbalance the fried cheese and chips of our first two. The Patzari (roasted beetroot in cumin served with yoghurt, $7.50) added some non-yellow colour to our meal, not to mention some tender vegies - they were well roasted, and real beetroot is a treat whenever you eat it, but the cumin didn't quite shine through like I'd hoped it would. 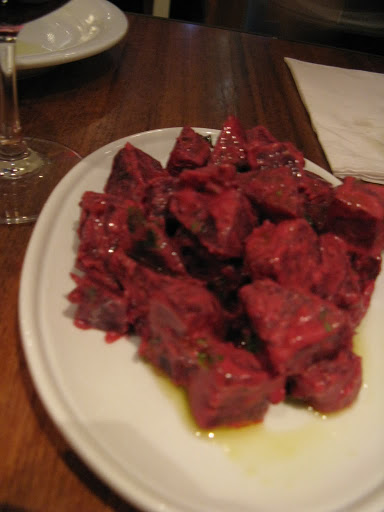 Our other healthy option was the Horta (wild greens served cold with olive oil and lemon juice, $7.50) 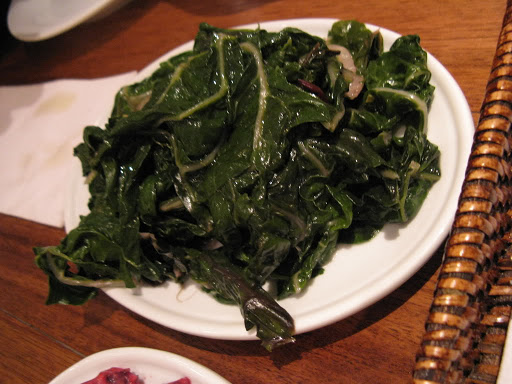 I'm not sure what made these particular greens wild but they were delightfully slathered in oily lemon flavours, and probably not the counterpoint to the cheese that I pretended they were.
Finally, we traded some of our chips with Mike and Jo in exchange for a taste each of their spanakopita (spinach pie, $11.50). There was something unidentified in the filling that I thought gave this spanak something a little extra, but the pastry was a bit of a let down (not as light and crispy as I'm used to), making this the night's only real disappointment. 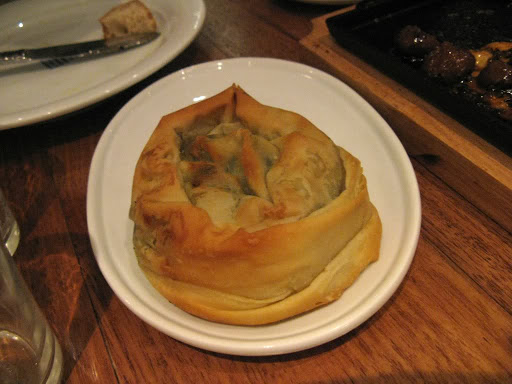 Cindy had been planning her ordering around dessert from the moment we'd picked up the menu, so there was no question that we'd be sampling something from the sweets section. The question was, how much? We were all set to order one dish each but our helpful waiter advised us that we'd probably all end up dead, and suggested we split three instead. So we did: Loukoumades (Greek donuts soaked in Attiki honey, $12.50), Baklava Yianniotiko (baklava from Yiannina, $11.50) and Ekmek Kataifi Pagoto (Soaked Kataifi, cherries and Mastic icecream).
There's not really much to say about baklavas - these were quite good versions of the idea, but be careful not to do what Cindy did and bite into the whole clove that's baked into the pastry - hmm, strong! 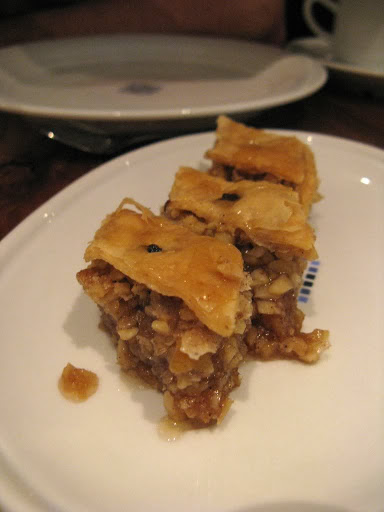 The donuts were nothing if not plentiful - I'm very glad that the original order (which had me dealing with a bowl of these on my own) didn't stand. They're pretty special - the honey is very sweet and would probably be overwhelming after about three, but they're chewy little balls of joy for the first couple. 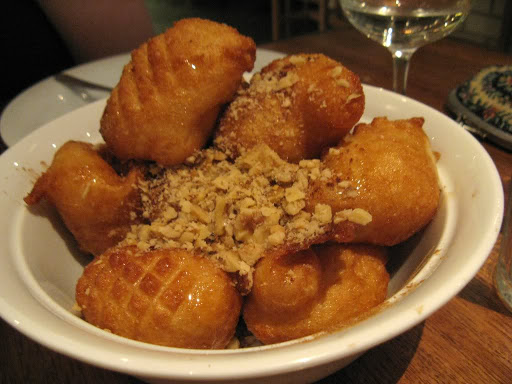 Finally, the mastic icecream. This was a little strange - it started out making everyone slightly uncomfortable but the flavour really grew on us, and it was rivalling the donuts for best dessert of the night by the end. The soaked pillow of nut pastry (kataifi) was pretty outstanding as well. 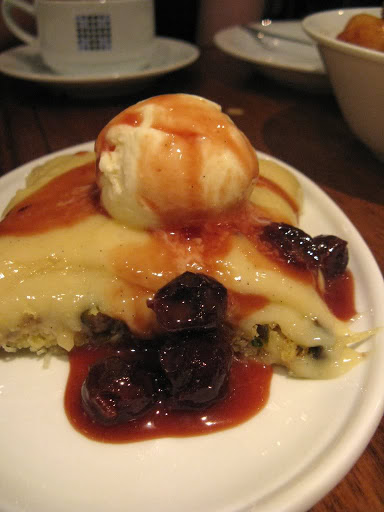 So take all that, add a couple of meaty plates, two carafes of wine and a couple of coffees and estimate a price - I estimated a lot more than the $180 that it cost the four of us. Our four vego plates come in at $35, which is insanely cheap for the quality of the food that's being put on your plate. It's probably pricey enough that we'll not become super regular visitors to Hellenic Republic but for a treat night out, it's great value. By all accounts the meaty stuff is excellently prepared as well and the whole place is running pretty smoothly already (I think they've made their lives easier by bringing a whole bunch of Press Club staff across to get things going), so we were all pretty pleased with our visit - maybe we should check it out again for breakfast one of these days.
Address: 434 Lygon Street, East Brunswick
Ph: 9381 1222
Licensed
Price: Small plates, $7.50-$13.50; desserts $3.50-$12.50
Website: http://www.hellenicrepublic.com.au/ (coming soon apparently)
Posted by Michael at 4:19 pm