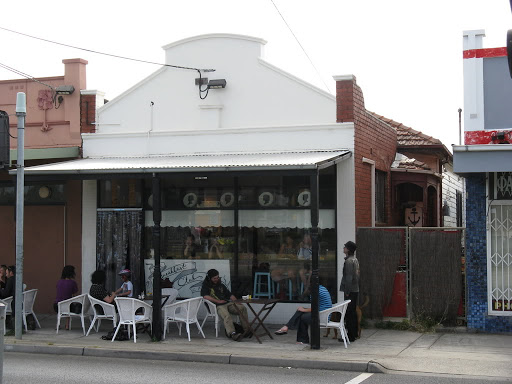 I'm not quite sure why it took so long for me to notice the Breakfast Club and tack it onto my to-do list of weekend breakfasts; it's already seen its share of blog attention. It could be my indifference towards the John Hughes movie that this cafe and a few of its dishes are named after, but it's not as if my dislike of Will Oldham prevented me from visiting and liking A Minor Place. More likely it's been my conviction that Northcote is a little too far and too difficult to travel to for breakfast. But Lisa showed me the way, and now the Breakfast Club's been conquered! 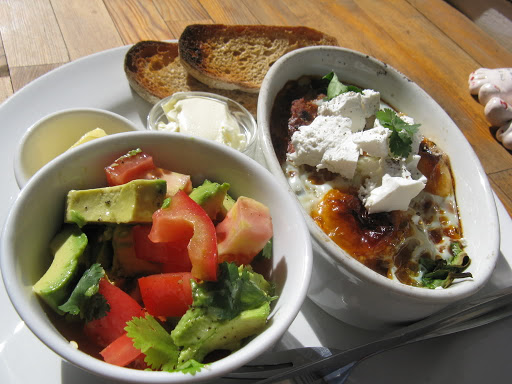 A first look at the menu turns up eggs, eggs, eggs - three dishes of the baked variety and two 'eggs in a roll' (I guess they're fried). This of course was just fine with Michael; he was happily pronouncing the baked egg plates all vegetarian when he noticed that he'd ordered something with bacon, and had to scoot back to the counter to change his order to Huevos Rancheros ($14.50 - 2 free range eggs, beans, baby spinach, soft cheese, fresh herbs; avocado, tomato and coriander salad; sour cream). He said the eggs were a bit firm and the price was higher than other cafes but he concluded that it was very good; for the volume and variety he received it looks like a fine deal to me, especially if you appreciate the tomato rather than picking around it. 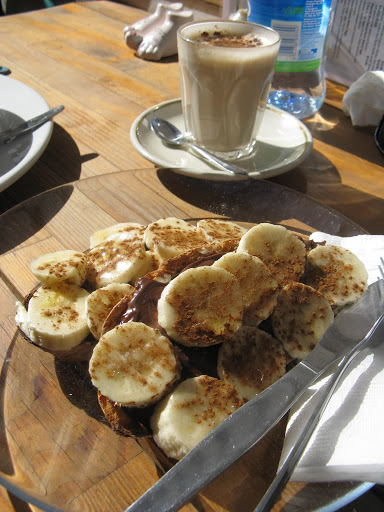 Beyond the eggs there is a promising little section entitled Sweet Tooth. It doesn't feature the usual pancakes or French toast and I liked that - instead I could choose between Coco Pops, muesli, banana'n'date bread and my ultimate choice, the Bananarama. (The menu helpfully notes that vegan versions of the muesli and banana'n'date bread are available.) The standard Bananarama is toast with cream cheese, banana, cinnamon and honey ($7); I spent an extra dollar to get the deluxe version with nutella. It was delicious, $8 very well spent, though I would probably have been equally happy had the cream cheese and honey been absent. This chai latte ranks among my most-enjoyed, too.
Other bloggers have complained about slow service and no printed menus, but these appear to have been dealt with. It looks to us like the inner north has another very worthy breakfast hangout! It's a little beyond our usual neighbourhood of morning haunts so they may not see us as often as they deserve to, but there's hope yet - the lunch menu doesn't look too bad either.
Address: 206 St Georges Rd, Northcote
Price: veg breakfasts $4 - $14.50
Posted by Cindy at 5:06 pm