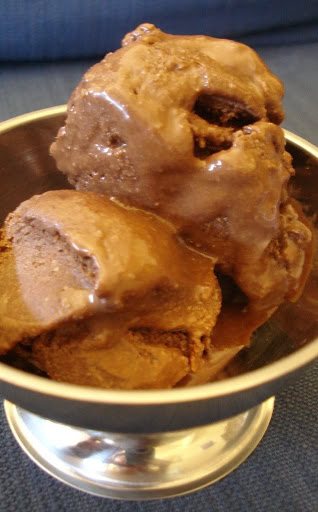 After the lacto-ovo-orgy that was the passionfruit icecream, I turned to Jeff Rogers' Vice Cream for a vegan alternative. His chocolate icecream uses cocoa powder rather than chocolate, and the book is generally all 'organic' this and 'raw' that, so I must admit that I was bracing myself for an insipid ice. But I was wrong - as soon as I whizzed in the cocoa powder the mixture took on the dark colour and flavour I love. It was surprisingly smooth, too, so I had high hopes for this batch of cashew-based icecream.
Alas, this one failed to fluff up at all while it churned, even though my two previous vicecreams became dreamy clouds in half the time of my typical dairy-based mixtures. This means that the icecream's doomed to freeze dense and hard. So I stirred through a tablespoon or two of Kahlua - alcohol inhibits freezing and I hoped it'd make this vicecream a little softer and more scoopable. (As an aside, I think Kahlua is vegan but please correct me if I'm wrong.) It worked a little, I guess, but to my surprise the cashew particles I didn't detect in the unfrozen mixture were back. I'm beginning to think that the only way around this is a fancy (and expensive) blender. It'll be no chore to spoon my way through this chocolate confection, but I can't help wondering whether I've yet eaten vicecream at its best.

Put the cashews into a food processor and blend them to a smooth butter - this will take several minutes. Add the water in two or three small batches, blending until well combined each time. Add the maple syrup and vanilla and blend again; add the cocoa powder and blend some more.
Chill the mixture until it's very cold, then churn it in an icecream maker. If it doesn't froth up with air after the usual churning time, you could stir through a little Kahlua to prevent it from freezing too hard.
Posted by Cindy at 2:00 pm