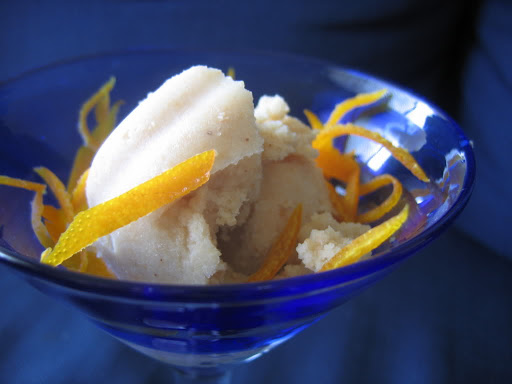 So that recipe for candied rinds told me to discard the sugar syrup after I'd sweetened and softened up those orange bits. Nuh-uh! That's sweet, fragrant sugar water we've got there, why would I throw that out? The orange flavour was quite delicate and I was after something that would allow that to shine through. My mind turned to the subtle and summery vice cream that I tried back in January - I've never teamed cashews and oranges before, but I thought it was worth a shot.
It was. With a bit of extra oomph from a few drops of orange essence, the two flavours shared the spotlight nicely. However, the texture just didn't work out for me this time. I tried soaking the cashews beforehand and they were looking pretty soft, but I guess I just didn't give them long enough in the food processor. Once in the ice-cream maker, this mixture was looking super-thick after only 15 minutes (this typically takes 30-40 minutes with a standard ice-cream recipe) so I took it out. Perhaps a bit of extra time churning would have improved the texture, but I suspect it all goes back to the processing phase.
So, this rendition of orange-scented cashew ice was a bit too big on the ice. But teamed with the blueberries sitting in the freezer, I'm sure we'll be able to polish off this slightly fruity number.
Orange-scented cashew ice

Soak the cashews in the sugar syrup and water for at least an hour (or up to a day) in the fridge. Add the orange essence and blitz the mixture in the food processor until the cashews are as liquified as possible. (It may help to drain some of the liquid away and then re-introduce it after the cashews are completely blended.) Return the mixture to the fridge until it's super-cold, then churn it in an ice-cream maker according to the manufacturer's instructions.
Posted by Cindy at 8:08 pm