Cindy continues to devour the combined output of Melbourne's 8 million food bloggers, so when the weekend rolls around and I'm looking for somewhere new to go for breakfast, she's always ready with a recommendation. This week it was Cafe Plum, thanks to the rave review from Agnes at Off the Spork.

I was a little worried as we approached - there were no other cafes nearby and from the outside Cafe Plum didn't look too exciting. But I was wrong to doubt - the inside was stylish and welcoming and the menu was full of delicious sounding breakfasts. After much agonising (the mushroom bruschetta and Castro's Cuban eggs both tempted me), I settled on the masala potatoes, with poached free-range eggs, spinach, herb mushrooms and tomato chutney ($13.50). As if that doesn't sound good enough, the chef apologetically informed me that they were all out of spinach and offered up asparagus instead. Winner! 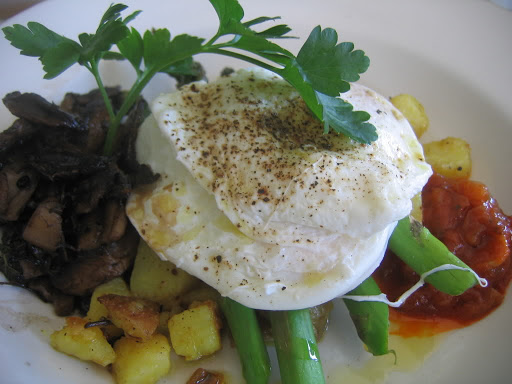 We'll get the negatives out of the way first: the eggs were maybe a tiny bit overcooked. Otherwise, this was a joy - perfectly cooked spuds well covered by a subtle but delicious spice mix, mushrooms fried up with a bunch of delicious herbs (including something twiggy, which the chef later informed me was lemon thyme), a homemade chutney for flavouring and some fresh, in-season asparagus just to cap things off. Tremendous.

I think as soon as the word marscapone appears on a menu, Cindy's decision is made for her. In this case it was blueberry pancakes with marscapone ($14.90). Another fine choice - the pancakes were stuffed full of fresh berries, dusted with icing sugar and served with a big, fat dollop of marscapone on top. I only got a tiny taste, but they were at least as good as they look. 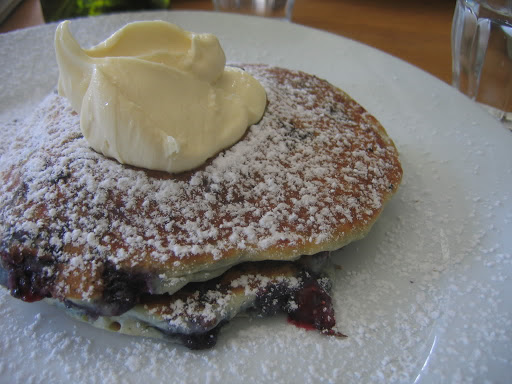 The service was friendly and efficient throughout and, as we were finishing up, the chef came out for a bit of a chat. He was a larger than life character, filling us both with even more enthusiasm for our morning meal. A little research once we got home revealed that the chef at Cafe Plum is Franco Italia - something of a celebrity in the Melbourne food scene having been head chef at Cafe e Cucina and Sud. We'd never heard of him before. Regardless he's a chatty, friendly guy and he runs a wonderful cafe that will surely satisfy your breakfast needs.