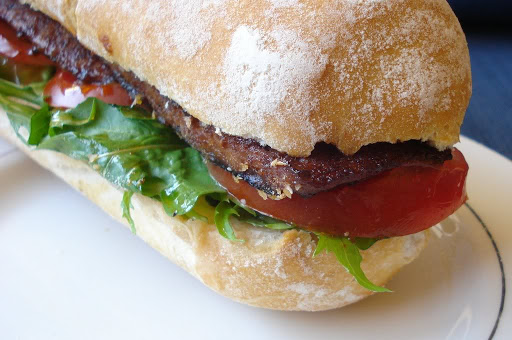 Tempeh bacon's had to wait a while to find its place in our kitchen. I've been wary of tempeh a long time - like tofu, it needs to be prepared with care and flair and I've eaten dull, dry renditions more often than not. And over the years I've seen many vegetarian marinades, including ones for tempeh bacon, calling for a mysterious ingredient called liquid smoke. I finally spotted it, almost by accident, in a deli at the Queen Victoria Markets last year and snapped it up. (It's proved a great addition to the already-awesome barbeque sauce.) The making of this recipe probably marks my graduation from a renewed tempeh interest (oh yeah, I made sushi again, this time with the actual tempeh) to a prolonged tempeh phase.
I think the most widely used tempeh bacon recipe comes from Vegan with a Vengeance, but since I don't have a copy I used a hybrid recipe from Jess of Get Sconed! and tinkered with it further. A finger lick of the marinade told me that this was potent and promising stuff, and the tempeh is sliced thinly to soak up as much of it as possible. As my not-bacon bits sizzled away, I set about making myself a T.L.T. on a half-baguette.
The verdict? Dang, that is good tempeh. Smoky, salty, and with a bit of bite, it doesn't particularly taste like bacon but it suits the greasy-bacon-rashers kinda role (and roll). Just to be sure, I had a fried-egg-and-not-bacon roll for brunch. 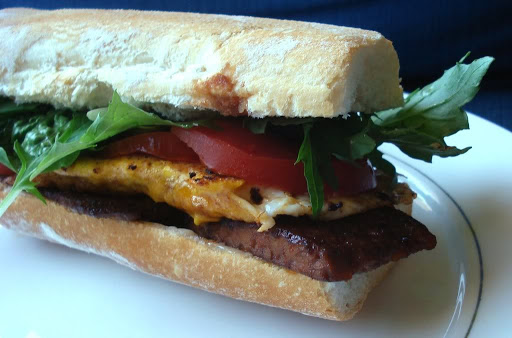 Yes. Yes, this will do quite nicely. And a tip for doubling your niceness? Mix together a little of the leftover marinade with some mayonnaise to spread on the roll. Saucilicious.

Tempeh, not bacon
(based on Jess' recipe at Get Sconed!)

Slice the tempeh into the thinnest sheets you can.
Whisk the rest of the ingredients (except the oil) together in a bowl.
Spread some of the marinade on the base of a shallow tray, lay out the tempeh, and spread over more marinade. Let the tempeh soak up the yum for at least a couple of hours; pop it in the fridge and it'll last for days.
When the tempeh's ready, pour a little oil in a fry pan a heat it to medium/high. Fry the tempeh strips until they darken and crisp up a little.
Posted by Cindy at 4:55 pm