After months of vague intentions, Cindy and I finally made the trip to Footscray on Saturday to explore Melourne's mulitcultural heartland. It was an odd kind of day - quite sunny and warm when we left Carlton, but cloudy and windy by the time the bus pulled up in Footscray. The change in the weather really enhanced the feeling that we'd travelled a lot further than five kilometres. After a quick wander through the Little Saigon market, which is filled with unidentifiable fruits and vegetables, Vietnamese hawkers and lots and lots of people, we decided to take a break from the crowds and find some lunch. There are a handful of impressive looking Ethiopian restaurants dotted around the suburb, but Cindy was determined to enjoy some Vietnamese food. Unfortunately, Vietnamese restaurants tend not to be the most vegetarian friendly places in town - the description of the beef pho in the window at Hung Vuong included the words: blood, tendon, offal and pizzle - meaning that we couldn't just wander into one of the dozens of bustling places that we strolled past. Luckily, our Cheap Eats guide came to the rescue - recommending Bố Dế Trai, a restaurant that combines Vietnamese cooking with Buddhist vegetarian ethics.

Emphasising how meat-based Vietnamese food tends to be, the menu was at least 50% faux-meat, with fake abalone, snapper, squid, chicken, duck, pork and lamb on offer (no pizzle though, unfortunately). Despite having spent the week munching our way through gluten pieces and TVP, Cindy and I were both keen to have a crack at some more imitation meat. She went with shredded imitation pork skin served with rice vermicelli and shredded greens. It looked a bit dry to me, but came with a little bowl of sauce that livened things up. 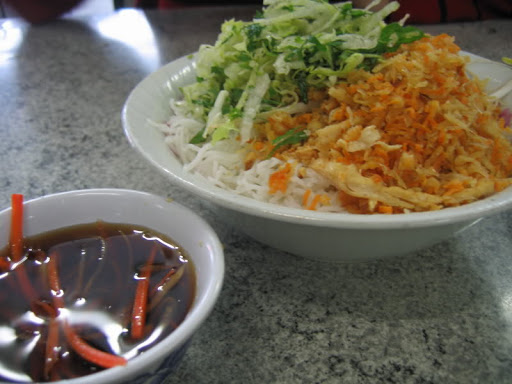 I was going to avoid faux-meat, but there was an article from The Age stuck to the wall advocating the imitation claypot lamb and I was unable to resist. It was a fine choice - a huge hotpot filled to bursting with vegies, crispy 'skin' bits and chunks of tender 'lamb'. The sauce was mild and flavoursome, loaded up with Chinese five spice and light on the chilli. It ended up being too much for me - it really would have sufficed as a lunch-sized meal for both of us - and, as delicious as it was, it's probably put me off any more faux-meat for a few weeks at least. 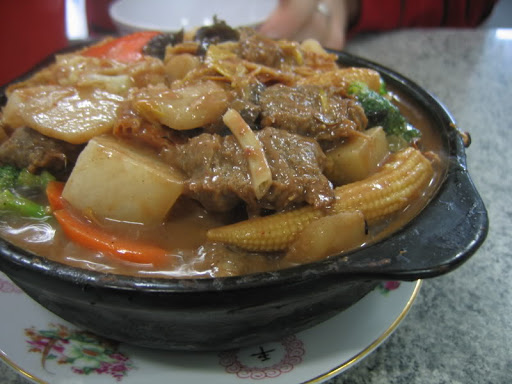 Which was unfortunate, as our next stop was Vincent's Vegetarian Food, an Asian grocery specialising in faux-meat products. We had a quick browse through the freezer sections, spotting eel, lobster, oysters, fish, beef, ham, pork, chicken, bacon and lamb, and grabbing a few bits and pieces for the (reasonably distant) future. Three cup chicken was something we used to buy fairly regularly from an Asian supermarket in Brisbane and turn into satay dinners, so we grabbed a packet of it. For the sake of variety, we also picked up some vegie sesame fillets (which look a little like the fake-fish of a few weeks ago), some roast 'chicken', a packet of taro paratha and, just because we spotted it, some agar agar (a non-animal based alternative to gelatine). 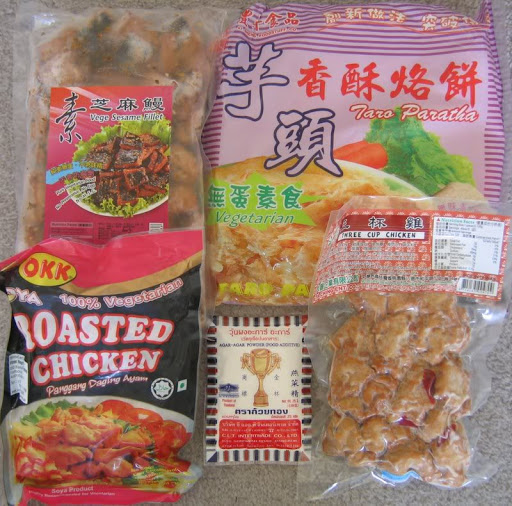 Loaded down with lunch and a backpack full of fake-meat, it was time to jump back on the bus and return to the more familiar surrounds of the inner-North. Still, it's nice to know that the tastes, sounds and smells of Vietnam are just a 20 minute bus ride away.