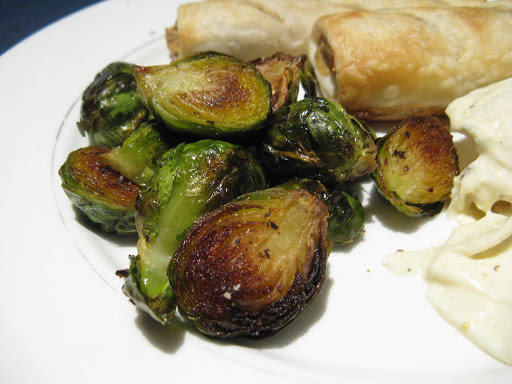 For most of my life, the Brussels sprout has been more a myth than a vegetable. Children and former children seem almost to rejoice in their hatred of it. I suspect that my mum was one of their number and thus never cooked them for me - I probably reached adulthood without even knowing precisely what a Brussels sprout looked like.

I suppose their green leafy layers and relation to the cabbage are not great selling points to the corn-and-carrots crowd, but I think these compact little bundles are actually quite cute. I count myself lucky that I'm only just getting to know them now, after a solid decade of developing a real appreciation for vegetables. This way I can say easily and without prejudice that I like Brussels sprouts just fine!
I'm not on any one-person crusade to raise awareness of the Brussels sprout. Plenty of other keen cooks have been enjoying it for years. It was actually a collaborator at work who first extolled to me the virtues of lightly steamed sprouts, fried in butter. Others eat them with bacon, chestnuts or cheese, and naturally they played their part in the Great Big Vegetable Challenge (even making the list of vegetables Freddie unequivocally likes!). In many recipes, caramelisation seems to be the key. So I started by frying them with sugar - even healthy Heidi Swanson recommends this approach! Served with tofu and nuts, the sprouts still maintain some fresh crispness and character of their own.

Having determined that Brussels sprouts are really quite alright, I was actually willing to play along when Isa Moskowitz made her bold claim that Brussels sprouts are the vegan French fry. In any case, her recipe corresponded quite closely with my favoured method for trying out many unfamiliar vegetables - just bake 'em with olive oil, salt and pepper until golden. The sprouts yielded spectacularly to this treatment. The insides were tender but not mushy; the caramelised edges delightfully flavourful; and those outer leaves! They were so delicately crunchy. Like the ones we ate at Attica.

Is the Brussels sprout my new French fry? Not by a long shot, but there's plenty of room for the sprout to do its own unique thing in my kitchen.
Posted by Cindy at 3:56 pm