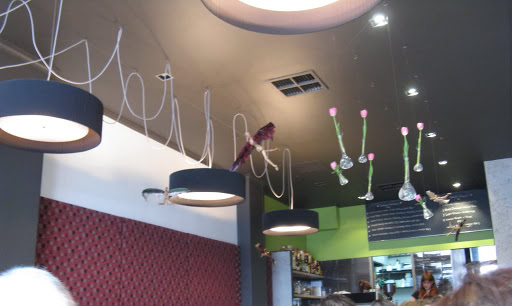 When we first moved to Melbourne and I started working on Gertrude Street I remember being very disappointed that Organic Gertrude, given high praise in our Cheap Eats 2006 guide, had left Fitzroy before I'd arrived, for more remote digs out at Fairfield. Still, it didn't take me long to discover the Vegetable Connection on Brunswick Street for my fresh fruit and veg needs. And then my disappointment was completely washed away when Birdman Eating appeared in Organic Gertrude's vacant premises. I got to work agitating for a visit straight away, but for some reason (the 20 minute walk and lack of direct tram featuring highly I'm guessing) I could never convince Cindy to head in for a weekend breakfast. Luckily, Cindy pays a lot more attention to Melbourne foodbloggers than she does to me, and when Mary raved about it (although she was hardly the first), Birdman suddenly appeared on Cindy's list of places we should visit.

All bitterness aside, I was looking forward to the visit. We were surprisingly fortunate with seating - arriving at 10:30ish on a Saturday and being ushered straight to a table. It's not an overly cluttered place, but there's enough decoration amongst the clean lines to give it a bit of character. The coffee here is top notch, and Cindy's chai hit the spot as well - a little weak, but neither too bitter or too sweet. 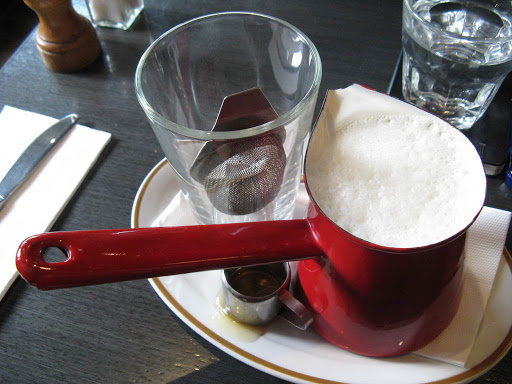 The menu is a little unusual - kippers and black pudding for the meat-eaters, Welsh rarebit for the cheese-heads and enough sweet options to satisfy the sweetest of tooths. Which made it even more surprising that Cindy ordered toast: toasted banana bread with honey and cinnamon labne to be precise ($9). 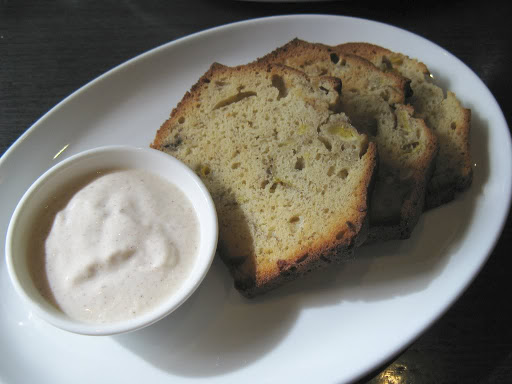 It was probably a little small for $9, but it filled her up and was reasonably tasty. I can't say much more than that - my banana phobia prevented me from even stealing a bite. 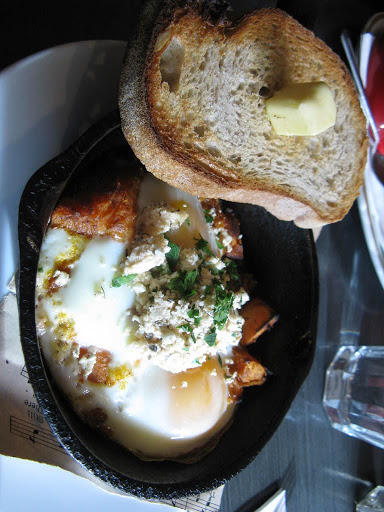 As well as the regular menu, Birdman has a rotating cast of baked egg treats on the specials board and, once I'd ascertained that shanklish was a kind of cheese, my heart was set on #3 - baked eggs with shanklish and sweet potato ($14). The eggs came out perfectly cooked, which meant that by the time they'd cooled enough for me to eat the yolks were a little too firm for my tastes. I guess you're just supposed to pounce and eat it while it's still bubbling (note: don't do what I did and touch the pan - not smart). Still, the shanklish was outstanding - lightly spiced and kind of yoghurty, and was enough to win me over. Particularly in combination with the soft and steaming sweet potato.

I think my memories of the Min Lokal baked eggs are becoming ludicrously positive (I guess we should go back to check), so these didn't quite measure up, but they rate pretty damn highly regardless. Despite the weekend crowds, the service was friendly and efficient (and trendy - I'm sure some of these places hire people based at least partly on how cool they look). Sure the bill was a little more than normal, but that's the price you pay for hobnobbing at the hip end of Gertrude Street these days.