Bling'n'Zing Biscuits or: How I learned to stop worrying and love vegan baking 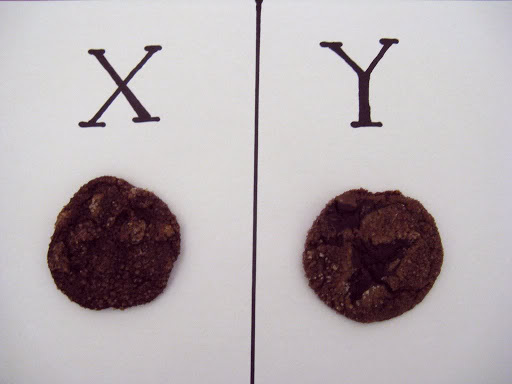 In the almost-four years that Michael and I have been vegetarian we've not come up against much resistance. Yet I've been surprised at the number of otherwise broad-minded people I meet who screw their noses up at vegan food. "I had a vegan biscuit once and it was revolting!" proclaimed one inner-city Melbournite a couple of months ago, dismissing the entire lifestyle on this fragile basis.
It irks me. Though there's a sizable portion of non-vegan foods in my diet, I've eaten (and cooked) countless wonderful vegan meals and treats without any sense of deprivation. This is probably why I was so interested in the Vegan Bake-Off organised to launch Leigh Drew's new cookbook, Vegan Indulgence. I wasn't particularly set on winning - I just wanted to check out the variety of vegan sweets made in ordinary kitchens and contribute something modest to the spread. Because really, how difficult could it be to make a good vegan biscuit?
I set to work on a Martha Stewart recipe for chocolate and ginger biscuits. The original recipe, which I've baked multiple times to great acclaim, isn't vegan but substitutions are a doddle - I used Nuttelex in place of butter and Lindt 70% chocolate for the chips. Since Nuttelex is not as firm as butter, I found it easiest to freeze rather than refrigerate the mixture before rolling it into balls. (As an aside, the dough remains pliable even after a week in the freezer - perfect for sneaking spoonfuls of any leftovers!)

In parallel I baked a half-batch of the buttery Nestle-choc-chipped version and took them all to work in separate boxes, one labelled 'Biscuit X', the other 'Biscuit Y'. Though my willing taste-testers enjoyed both formulations, there was a general preference for the non-vegan version. Based on the comments I received, it seemed to be the bittersweet chocolate letting biscuit Y down. I fired off an email to Kristy, who promptly recommended Tropical Source Semi-Sweet Chocolate Chips as a sweeter alternative. These were perfect! By 11:15 on Saturday morning I had plenty of sweet, chocolatey biscuits ready for the bake-off. They were flat and not overly pretty, but what the heck. As I filled out the entry form, I boldly named them Bling'n'Zing biscuits, after their glittery sugar crust and ginger bite. 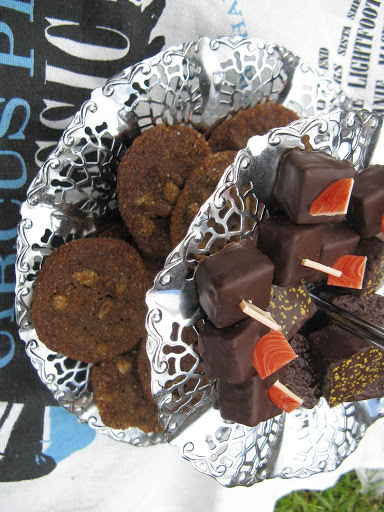 The Bling'n'Zingers pose coyly beneath more chocolate
As it turned out, I missed the bake-off entirely. The pleasant lunch we attended lingered on (Michael's review is coming soon!) and I couldn't get them in by the submission deadline. Instead I shared the biscuits around later that night, at a party of omnivores, known and unknown. Naturally few people were going to refuse the offer of a chocolate biscuit, but would they be able to tell? In this new light they seemed flat and dowdy and maybe a bit burnt. I was too embarrassed to tell anyone what I'd named them.
"Oh wow, they're glittery!"

"What is that? I know there's chocolate, but there's a secret ingredient!"
"It's probably love."
"No, it's ginger! Yum!"

Relief. I waited a few minutes more before telling the girl next to me that they were vegan. This information followed the biscuits round - there were a couple of nods and one pair of eyebrows raised in surprise.
"... so can I have another one?"

Though I missed the mother lode of sweet vegan delights, I'd like to think that those biscuits made the world a slightly more vegan-friendly place.
__________
Curious about vegan sweets?
Check out BitterSweet, the Conscious Kitchen, Vegan Yum Yum and ZB's Vegan Recipes and try not to drool on your keyboard.
__________
Do you have a favourite vegan dessert?
Does it use crafty ingredient substitutions or is it naturally free of animal products? Please tell us about it!
Posted by Cindy at 4:11 pm