08/01/2014: Jaipur Curry Bar has now closed its doors and neighbour Red Pepper has expanded into its space. 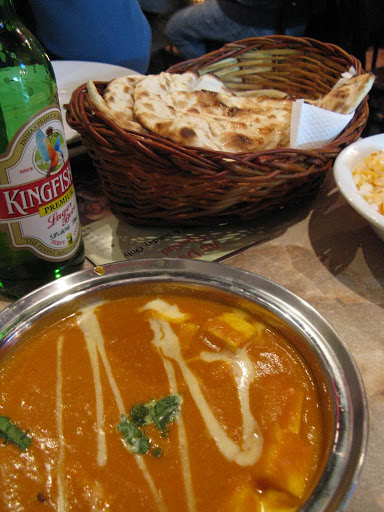 On Saturday night we were after a quick meal in the city before heading to MIFF. I took the opportunity to complete the Bourke St trio of Indian restaurants by visiting Jaipur Curry Bar. Nestled between Green Pepper and Red Pepper, the setting straddles the two - tables are very much cafeteria style but some effort's been made to colour and decorate the walls. Interestingly the menu includes beef, though goat is more dominant. 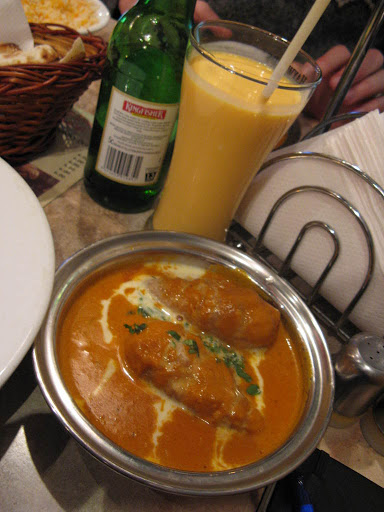 Jaipur initially scored points for actually having the mango lassi that was advertised on the menu. Entirely for the sake of comparison, I ordered the malai kofta with two naans again ($9). The naan was pretty good but the curry was the least of the three - an average dumpling in a one-dimensional but rather hot gravy. Michael was faced with the difficult decision of choosing between five vegetarian paneer dishes; his kahari paneer ($8, with rice) was a good one, milder and sweeter than mine.


Jaipur seems to distinguish itself from its rivals in a few ways: an upstairs area available for private functions, a lunch time bain marie, and charging a couple of dollars less per meal. However, the service seems to be even more indifferent than its no-frills neighbours. I've just read a couple of other people's stories and our experience had its own incident. A very drunk and disruptive patron (who ordered no food that I could see) actually caused multiple customers to either move tables or leave the restaurant before ordering. The obvious solution would be to simply refuse to serve this 'gentleman' any more alcohol; he'd most likely leave, increasing the likelihood that other customers would hang around and spend money; what's more it's the business' legal responsibility. Yet several staff members continued to serve him beers throughout our time at the restaurant. Would Red or Green Pepper's staff have reacted differently? I've no idea, but I'll now be visiting them in preference to Jaipur Curry Bar.