All August long: rhubarb and porridge 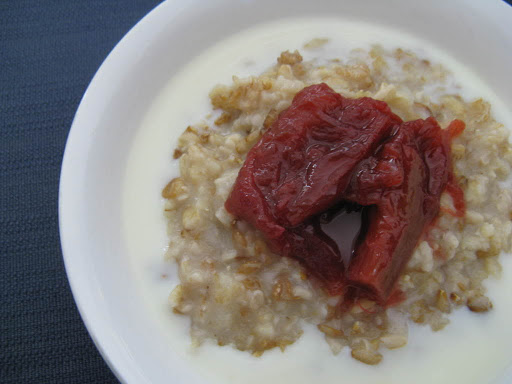 I'm currently harbouring a crush on rhubarb. It's like the best bits of red cordial and jube lollies without that chemical edge and soapy aftertaste. I assumed it couldn't get better than the rhubarb and ginger pudding I baked last year, but I was mistaken. Not only does rhubarb get better, it gets easier!
With the few stalks remaining after the muffins, I tried my hand at a compote. A quick scan of the internet had it looking simple enough - I didn't rely on a particular source, though I did imitate Lucy's sprinkle of rosewater once the cooking was over. Wow. That extra fragrance, that extra complexity, lifts rhubarb to a new plane! I spooned it generously over porridge, carefully rationing it out for each mouthful, savouring every last drop of the sweet-sour syrup. 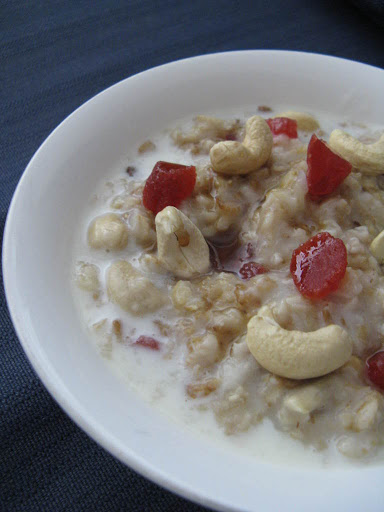 And now that I've mentioned porridge, it deserves a few words of its own. Though I could probably make my own mix more cheaply, I bought a packet of multi-grains (oats, wheat, triticale, rye, barley and rice) as an incentive to make porridge at home. This habit has outlasted the sublime rhubarb compote, and it has proved an enjoyable and nourishing way to finish stray packets of dried fruits and nuts languishing in the pantry. Dried strawberries and maple syrup made a lovely pair, though the accompanying raw cashews failed to make an impact. I thought that using pomegranate syrup and pistachios was inspiration from heaven but the syrup was actually too sour - golden syrup fared better.
There's been a lot of trials and a little error. One thing's for sure - porridge need never be beige or bland again. 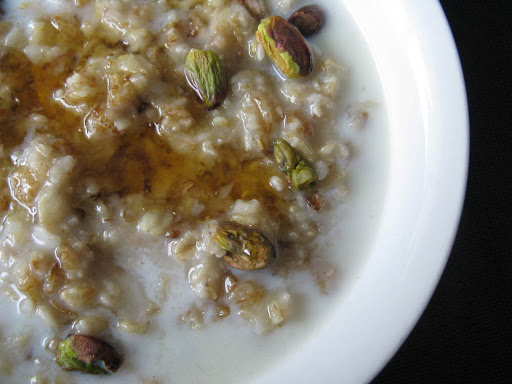 Chop your rhubarb into 4-5 cm segments. Deposit them in a saucepan with a scant tablespoon of raw sugar for each stalk. Add a splash of water to help the sugar dissolve. Stir the mixture regularly over medium heat until the sugar melts, and the rhubarb softens and starts to break down. (This took me 10-15 minutes for 3 stalks.) Allow the compote to cool slightly before sprinkling over some rosewater.
Posted by Cindy at 7:06 pm