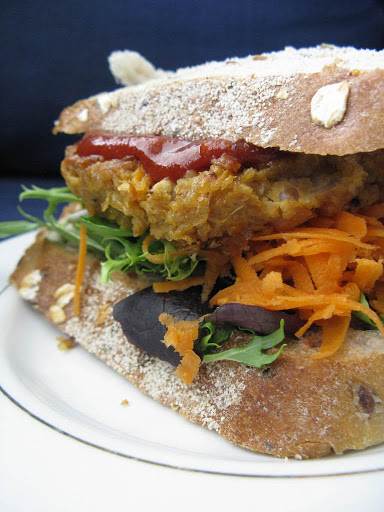 I recently spotted this vege burger recipe on melbedggood.com and tagged it 'cause it utilises two foods that have been languishing in our pantry for a while: bulghur and peanuts. With its nutritious ingredients list and oven baking, I was curious to see how these patties would measure up in taste and texture to other recipes we've tried. They have a pleasant nutty flavour and the bulghur doesn't make them too heavy, as I feared it might. However, the patties didn't hold together quite as well as I'd hoped they would. I wonder if a bit of extra oil on the baking tray would help?

I also took Mel's advice in making some barbeque sauce to plonk on top - gold! The recipe requires only a quarter of an onion, so I slow cooked the remaining three quarters in rings as an additional topping. It was a thoroughly enjoyable meal, though not a serious threat to the household reigning burger champion, the chickpea cutlet.
Posted by Cindy at 9:44 pm