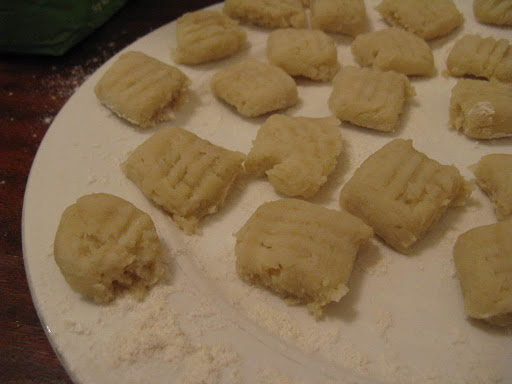 Lest you think that it's all virtuous breakfasts, golden vegetables and effortless treats in our kitchen, let me tell you about our latest cooking failure. For some time I've been wanting to try making my own gnocchi. Keen to enjoy it while the weather's still cool, Michael and I used a spare Saturday to pick out a recipe, buy a cheap potato ricer and some groceries on Sydney Rd and set to work. Along the way we decided to invite my aunt Carol to share dinner with us - it's been a while since we last had a meal with her.
This was a team task, and Michael and I worked together well enough. We got started long before Carol was due to arrive but the hour-long baking that the potatoes required set us back. We'd chatted and prepped and drank for a good hour with Carol before we had the little pillows pictured above, ready for cooking. Sadly, cooking transformed them into this: 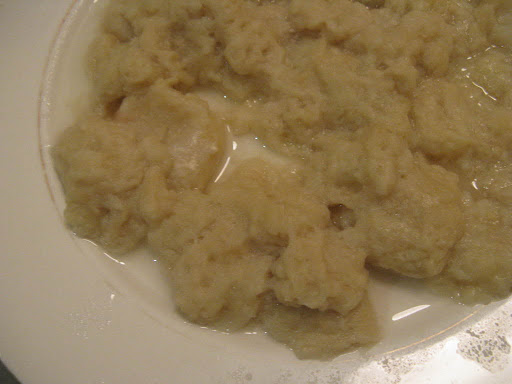 We called for pizza.

Pathetic as out not-cchi were, Michael and I weren't too embarrassed. Carol takes great pleasure in food but doesn't bother herself much with cooking at all. Our efforts were impressive enough, and the pizza we eventually ate was happily washed down with a glass of red.
Dessert was my chance to make amends - I'd chosen another hearty dish that I wanted to try before winter ended. The Amish apple dumpling (as interpreted by Kurma Dasa): a whole apple wrapped in homemade pastry and baked with a caramel sauce. With the pastry prepared in the early afternoon, they didn't require too much extra effort and looked rather cute. Here they are, about to go into the oven: 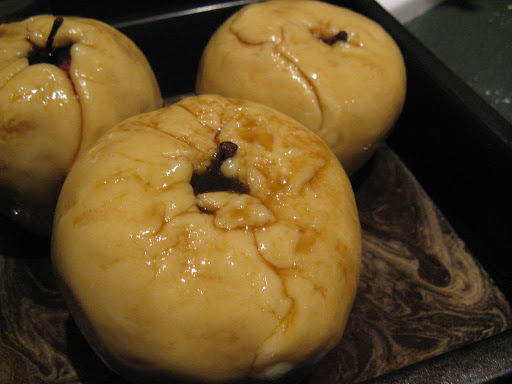 As they baked, I wondered aloud whether I was supposed to have peeled the apples. Yes, actually, confirmed the cookbook. This is probably why: 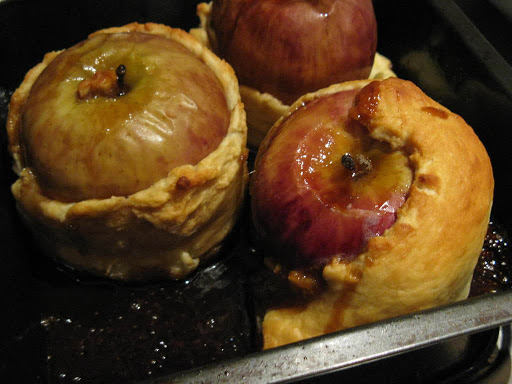 Scandalously disrobed as they were, these apple dumplings proved to be entirely edible. The fruit (including the skin!) was warm and tender, the pastry golden with scrumptious caramel edges. Phew! A night for humility but not despair. 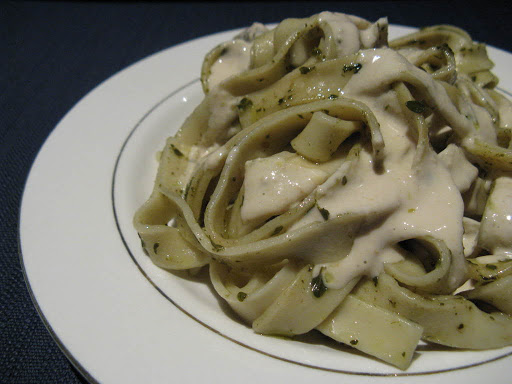 Though our gnocchi were terrible, the thyme vinaigrette and lemon cashew cream we'd prepared to eat with them were sensational spooned over tagliatelle the following night. We'll be back for more!
Posted by Cindy at 7:41 pm