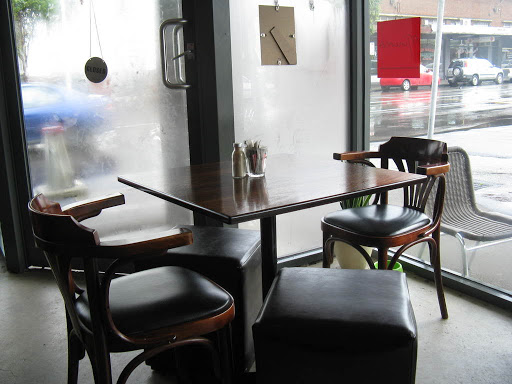 Cindy and I invented some excuse for a Saturday breakfast on the town - I can't even remember what it was, maybe we were out of milk. Anyway, I did some quick internet research and convinced Cindy that we should go somewhere new. And that somewhere was Minimo.

Minimo isn't quite part of the whole Sydney Road scene in Brunswick, it's just a little bit north of the trendy bits. And Minimo's not entirely trendy - it's low key and relaxed, with lots of big windows and a fairly large open kitchen plonked in the corner.

The menu is basically divided in two: eggs and French toast (there are some beans and things tacked on to the end, but the eggs and toast are the real focus). I spent a while pondering, before settling on the tapenade: two poached eggs, mushroom and capsicum tapenade with sour dough. Of course as soon as I'd made my choice, the waitress came over and reeled off two stunning sounding specials: some sort of purple roesti with poached eggs and the eventual winner: two poached eggs with grilled field mushrooms, blue cheese and a chilli jam served up on sourdough toast ($14). Hard to resist. And it comfortably lived up to my expectations - two neat little eggs, plopped on a couple of mushrooms all piled up on the toast with the chilli and cheese drizzled across the top and a smattering of greens and cherry tomatoes for colour as much as anything else. It all dissolved pretty quickly into a liquidy, eggy mess and became much less photogenic. Still, the cheese and chilli combined brilliantly with the perfectly poached eggs and even the tomatoes were little bursts of flavour. Great, great stuff. 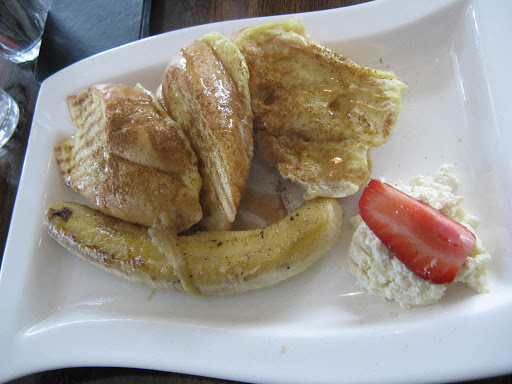 Cindy couldn't resist the lure of French toast, unfortunately rejecting my two preferred options: mixed wild berries or stewed apple and pear, instead intentionally picking out something she knew I wouldn't steal: caramalised banana, served up with maple syrup and ricotta ($12). The toast was smothered in eggs (maybe more than Cindy would have liked), but the banana was caramelly and delicious (at least as much as bananas can be). 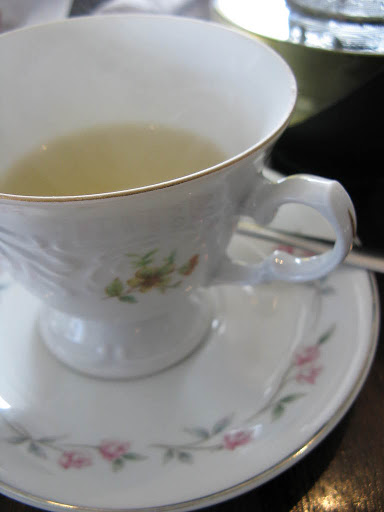 Throw in some great coffee for me, and a ginger and lemongrass tea for Cindy and you've got a very satisfying breakfast. The portions Minimo serves up aren't gigantic, but they're perfectly formed - neat little plates filled with flavour and imagination. The staff are all ridiculously pleasant and friendly and the whole vibe of the place (at least by midday or whenever we turned up) is laid back. So ride the tram a few extra stops next time you're heading to Savers or the Meditteranean Wholesalers and stop in at Minimo for a bite.