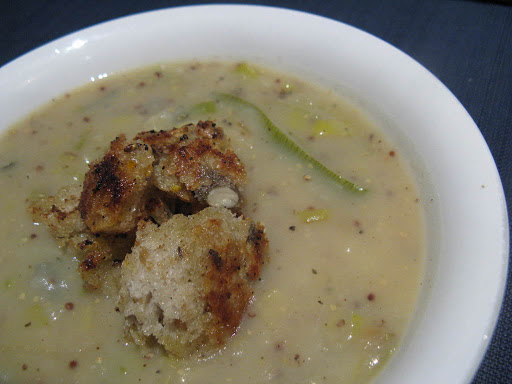 Cindy and I had cooked up some vague dinner plan, but when I caught the scent of the potato and leek soup in Radio (which, by the way, has added more options to its lunch menu and is now the clear lunch winner on my end of Gertrude), I cancelled whatever other notions we had and decided that it was time for another soup. After a bit of poking around the internet, we came up with this recipe, from Reynard's Feast, which Danika sadly appears to have stopped updating.
We weren't organised enough to have faux-milk in the house, so our version ended up being non-vegan. Similarly, we were forced to resort to dried sage through general lack of planning. Regardless, this worked out excellently - the mashing of the spuds (rather than blending) makes for a more interesting consistency. So much so that I decided just to mash the cooked leek as well, which meant it retained a slight chunkiness. The mustard gave the milder flavours a bit of an edge, and Cindy topped it all off with some impromptu croutons - not a bad dinner for about half an hour's work.
Posted by Michael at 9:46 pm