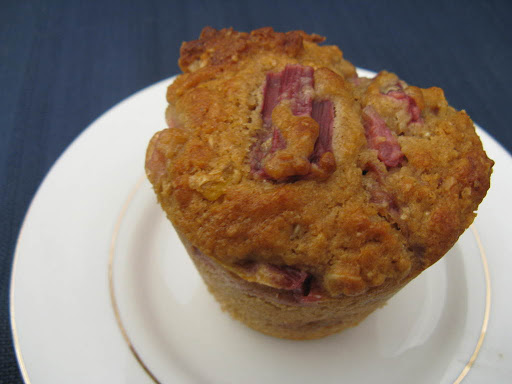 Though I baked these muffins a day or two later, I expect that this recipe will consistently remind me of Saturday, June 26. On this day Michael and I took a friend to the Slow Food Farmers' Market in Abbotsford. I bought a bunch of rhubarb and while Michael was lining up for coffee, I also succumbed to the temptation of a single-serve rhubarb tart, sold with a dollop of fresh cream.

An hour later we congregated at the Convent for the Meatless Blog Meet over lunch. Though Duncan, Claire, Agnes and Ed provided reassuringly familiar faces, it was quite exciting to meet many others for the first time: FoodieFi, Another Outspoken Female, Lucy, Anh, Bunches, Dani, Melba and Johanna. And it's with Johanna that we come full circle, because it's her recipe for oaty rhubarb muffins that I particularly bought the rhubarb for!
This muffins are prime afternoon snack material - wholesome and filling, with pink fruity bursts providing the sweetness I'm typically craving at that time. They're also no too taxing to put together on a weeknight - no softening of butter is required!
Oaty Rhubarb Muffins
(I got 14 standard-sized muffins out of this quantity)

Preheat the oven to 180 degrees C and lightly grease a muffin tray.
In a saucepan on gentle heat, stir together the rhubarb and raw sugar until the sugar has melted and the rhubarb softens just slightly.
Whisk together the buttermilk, egg, oil and brown sugar. When the rhubarb's cooled down a little, stir it into this mix.
In a large bowl, mix together the flour, baking powder, oats, spices and salt. Toss through the candied orange and ensure the pieces are separated and lightly coated in flour.
Pour the wet ingredients into the dry ones and stir until just combined. Spoon the mixture into the muffin tray and bake it for about 20 minutes - I think I baked mine for a little less time, so keep an eye on them and use the skewer test.
Posted by Cindy at 2:00 pm