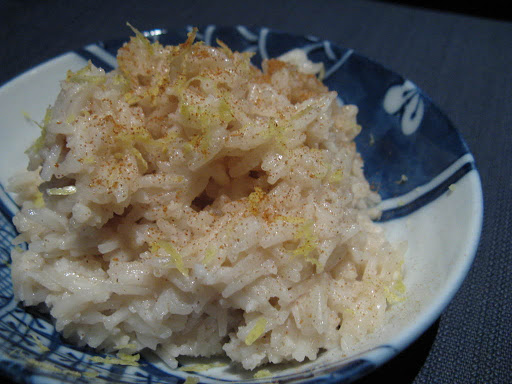 Cindy and I had spent most of July living without a kitchen, so we were running out of time to get to our monthly World In Your Kitchen recipe. July's treat was a coconut rice pudding from Venezuela. I think I say this every time: the recipes on this calendar are simple - this one has just 6 ingredients and was completely easy to pull together. As usual though, this has a downside: often the dishes we make from the calendar are inferior versions of slightly more complicated recipes of the same dish (see these two harira soup recipes for example).

This was no exception - it was tasty, with the cinnamon and lemon adding a little spark to the sugary base. Still, it was a bit lacking in textural variety (some nuts or dried fruit might have kept things a bit more interesting), and fell well short of the rice pudding heights that Cindy has previously taken things to.

Put the rice into a saucepan and cover with boiling water. Cook for ten-fifteen minutes, until the rice is almost cooked. Drain the rice (careful not to burn yourself!)

Return the rice to the pan, add the coconut, milk, half the cinnamon and the sugar and mix it all together.

Cook over low heat for about 10 minutes, stirring frequently, until the rice is cooked properly.

Plate it up and then sprinkle with the lemon rind and remaining cinnamon.
Posted by Michael at 11:30 am