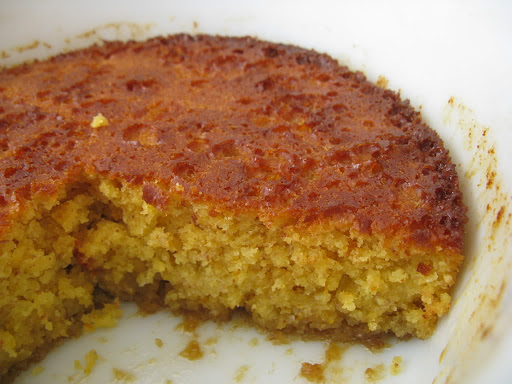 This pudding and I have had a rocky relationship. It wasn't love at first sight, though there was undeniably an attraction there when I first spied the recipe in a weekend newspaper. The first date, only a few weeks later, was definitely a success; I even presented him to my Dad and brother after dinner.
Then the seasons shifted, time passed, and I moved to a new city. When winter arrived I tried to dress my recipe up in more sophisticated ramekins, which was a complete disaster. (You know what they say about men and baking recipes - don't try to change them.) Dishes were thrown, things were said - we clearly needed another break from each other.
With winter returning again I wanted to find out if this pudding and I could become 'just good friends'. I set about recreating the comfortable environment of our first meeting. Grind, grate, beat, fold: everything seemed to be running smoothly and I started to relax. Then I'd just put the pudding into the oven when I realised I'd forgotten to add the baking powder. Crap. So it was a hasty trip back out again for a highly unconventional stirring of the powder into the batter, while trying my best not to disturb the underlayer of maple syrup.
You know what? Everything turned out fine. Crisp top (all cratered from the belated baking powder), moist and slightly coarse interior with hints of mandarin and almond, and a sweet and sticky maple base. We've been meeting cheerfully over cups of tea for a full week!

Mandarin maple pudding
(credited to Matthew Evans, and most likely taken from the Good Living section of the SMH in 2005 or 2006)

Preheat the oven to 200 degrees C. Use an electric mixer to cream together the butter, sugar and golden syrup. Beat in the eggs, one at a time, until well mixed. Fold in the zest, flour and almond meal.
Grease a 2L casserole or pudding dish, then spread the pudding batter evenly over it. Pour the maple syrup over the batter as evenly as you can. Cover the dish with foil.
Fill a baking tray with hot water, 2cm deep. Place the pudding dish into it, then put the lot in the oven to bake for an hour.
Take off the foil, turn the oven down to 180 degrees C and bake for 20-30 more minutes - until the top is golden and firm, and a skewer comes out cleanly.
Serve warm with cream.
Posted by Cindy at 3:32 pm