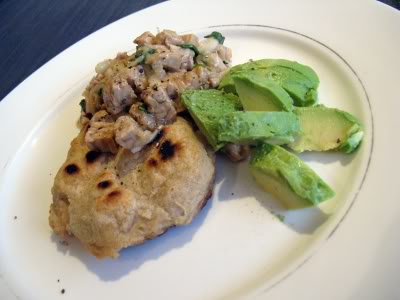 Cindy's ridiculous work birthday started with a breakfast out, was broken up by lunch provided by Mankoushe and was capped off with a home-cooked dinner from yours truly. She'd put her order for arepas in early and I'd headed off to Casa Iberica and Minh Phat to buy key ingredients - everything was in place. I couldn't find Colombian-style masa harina at Casa Iberica, instead grabbing the Mexican version. If I'd bothered to read the Viva Vegan recipe I was cooking from properly, I'd have noticed the line, "Never substitute Mexican-style masa harina." As it was, I read it at 7pm on Saturday night,and decided to push on regardless. Despite much grumbling and numerous retweakings of flour/water ratios, these arepas weren't a total disaster. They weren't amazing but were reasonably edible (at least after a few mojitos) but I won't post a recipe until I do a better job.

The filling, on the other hand, worked out pretty well. This was another Cindy choice, straight from the pages of Viva Vegan. There was one tricky ingredient - jicama - which, after some Twitter consultation, I decided to substitute with kohlrabi. Otherwise it was all pretty simple - a lightly flavoured tempeh mix and some fresh avocado slices, which worked particularly well topped off with a smear of Casa Iberica-sourced chilli sauce (not pictured - this was Cindy's milder meal). While the whole special birthday dinner plan fell a bit short of greatness, things could have been much more disappointing.


Avocado-tempeh filling (for arepas)
via Viva Vegan
250g tempeh, cut into 1/2 inch cubes
1-2 tablespoons soy sauce
1/2 cup vegan mayo
juice of 1.5 limes (use the other half in your mojitos!)
the green parts of 2 green onions, chopped finely
1/2 of a kohlrabi, peeled and grated
1 ripe avocado, peeled and sliced


Pop the tempeh chunks into a large saucepan full of boiling water and cook for 10 minutes, stirring occasionally. Drain, sprinkle with soy sauce and leave to cool.

In a separate bowl, whisk together the mayo, lime juice and pepper, and then stir in the green onions, kohlrabi and cooled tempeh. Cover and chill for half an hour or so to allow the flavours to blend.

If your arepas have worked out perfectly, cut them open and fill them with a layer of the avo and a generous stuffing of the tempeh mixture. Otherwise just slather everything on top and enjoy the glorious mess.
Posted by Michael at 10:08 am