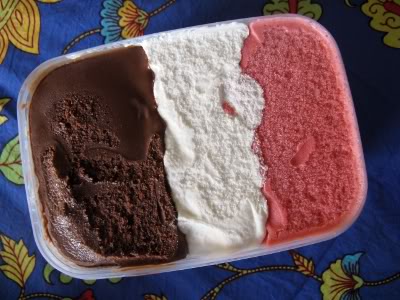 So this birthday of mine was a notable one, as far as societies with decimal numeral systems go, and I wanted to do something special to mark it.  I did a few nice somethings, actually, but the most notable event was a vegan icecream potluck party.  I hinted at it months in advance, K supported it with dizzying enthusiasm, and everyone else kindly went along for the ride.  I spent weeks consuming everything not icecream related in the freezer, planning flavours and waffles and suggesting others bring fruit, sauce, sprinkles, cookies - anything that'd fit into a Saturday afternoon sundae.
I knew I'd be crazy not to make my salted caramel triumph again, and from there I mused about chocolate and peanut butter and vanilla and fruits... until I thought of Neapolitan and just couldn't stop thinking about it.  It's a childhood staple that many vegans probably wouldn't have eaten in years, and would be all the better for being made with real strawberries.  Could I arrange the three layers neatly?  Would it take me days?  I knew I had to find out.
I started out almost a week in advance, preparing the strawberry layer.  I found that the flavour of my punnet of strawberries was a little overwhelmed by the coconut milk, and added a little pomegranate molasses as a tangy boost.  I also couldn't resist a few drops of my vegan-friendly red food colouring for that straight-out-of-childhood hue.  Once churned it was quite easy to manoeuvre into an angled lunchbox, which I froze positioned on its side to make space for the chocolate and vanilla layers to come.

I prepped the vanilla section a day later without a hitch but came up against an unanticipated obstacle before I got to the chocolate.  I lost my sense of taste.  More completely than I have ever done before. I'd caught an epic cold, such that I couldn't discern a single flavour in the gorgeous, healing laksa Michael cooked for dinner.  This was not the time for icecream experimentation.  I reluctantly deferred my project for a few days, and insisted that Michael double-check my cocoa usage when I did eventually get back to it.  My last little challenge wasn't taste-based - I ended up making far too much vanilla and far too little chocolate icecream.  In the recipe below, I've suggested dividing 3 cans of coconut milk evenly between the vanilla and chocolate layers instead of my original 2:1 ratio.  Hopefully that'll make something closer to two even litres of tri-coloured goodness.

This icecream takes a lot of forward planning but I've no regrets - it sure put me in the right party mood!  And I'm mighty grateful to the fab veg*ns who granted my birthday wish.  They brought cookies and sprinkles and chocolates and fruit and waffles and icecream flavours you wouldn't believe!  Also laughs aplenty.  Among them K, Veganator and Johanna have blogged their contributions.


Wash and hull the strawberries.  Place them in a food processor with the lemon juice and puree thoroughly.  Add the sugar and arrowroot and blend until smooth.
If you want a smooth icecream, strain the strawberry mixture.  Transfer the strawberry mixture into a medium-large saucepan and stir in the coconut milk.  Taste the mixture and add pomegranate molasses if you want a more fruity taste.  Stir the mixture over medium heat until slightly thickened.  Remove it from the heat and add a couple of drops of food colouring.  Chill the mixture thoroughly in the fridge.

Place the arrowroot in a mug and add 1 tablespoon of the coconut milk, mixing it to a smooth paste.


Put the remainder of the first can of coconut milk into a medium-large saucepan with the sugar and set it over medium heat, stirring occasionally.  When the sugar has dissolved, add the second can of coconut milk and the arrowroot paste.  Bring the mixture almost to the boil, stirring regularly, and then remove it from the heat.  Stir through the vanilla and chill the mixture thoroughly in the fridge.

Dissolve sugar in the coconut milk in a medium saucepan; whisk in cocoa and arrowroot.  Bring the mixture to the boil, then take it off heat and stir in the vanilla.  Chill the mixture thoroughly in the fridge.