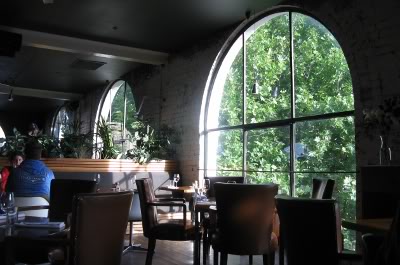 On Sunday night we met with Mike and Jo, took and lost a chance at Huxtable's non-reserved tables, and continued on to Panama. Three floors above Smith St, it's a surprisingly large venue with bars, pool tables, high tables and couches as well as a more conventional dining section. Glorious arched wall-to-ceiling windows funnel light to almost every corner, though when the light goes down I've heard the music go up and felt the vibe get clubby. 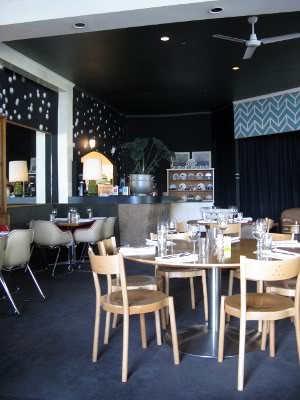 The menu offers a decent suite of vegetarian options - three out of eight starters, two out of eight mains and seemingly all six sides - though a vegan might have to negotiate with staff (the chickpea chip starter and lentil salad main might fit the bill). With starters at least $10 each and mains exceeding $20, we were hoping for something good. 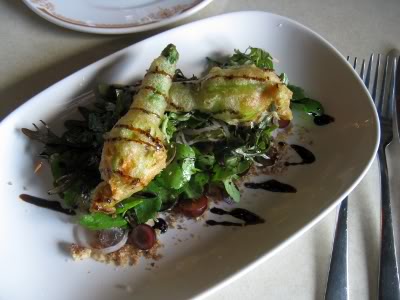 And our starter was good! Michael and I shared one of their specials - zucchini flowers stuffed with gorgonzola and served on a bed of greens and grapes (~$12). The textures were fresh and varied and the sweet/bitter/creamy/pungent flavours were lovely, though a bit unbalanced. Too much gorgonzola, Jo commented, and we agreed. 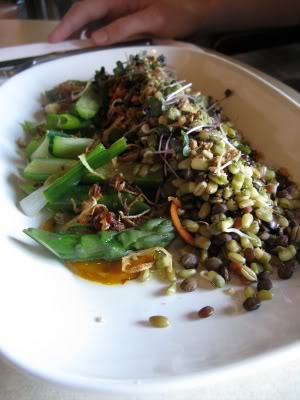 For his main, Michael ordered the warm salad of lentils, freekeh and crunchy sprouts with sauteed spring vegetables ($22.50). With the exception of the orange pumpkin smear beneath the veges it was bland, dry and disappointing. 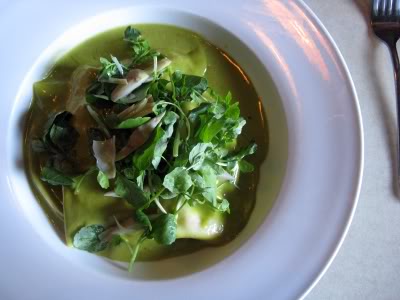 I fared better with the ravioli of artichoke, potato and two cheeses with creamed watercress ($24). This was definitely not dry - the sauce was almost a thick soup! There was plenty of springtime flavour and a pleasing balance of rich cheese and filling potato against the lighter watercress and hints of lemon.
It seems that I was lucky more than Michael was unlucky - Mike and Jo were distinctly unimpressed by their more meaty meals. It's a lovely setting that offers a few lovely dishes, but we'll be reluctant to fork out for such inconsistency again.
____________