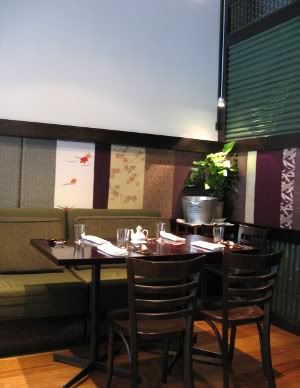 Good vego Chinese is hard to find (mock-meat places aside of course) - even in the vegetables and bean curd menu sections, many places throw in oyster sauce, pork mince or seafood (case in point: at a recent conference dinner I ordered 'stuffed bean curd in spiced salt', which turned out to be stuffed with king prawns). Our recent favourite, Idea Fine Food and Wine is no longer with us, so when semi-fancy meaty Chinese place Lau's Family Kitchen featured in Lisa's best eats for vegans and vegetarians we were very keen to give it a shot.

We teamed up with regular eating buddies Toby and K for an early Sunday dinner, admiring the cute wallpaper decorating small sections of the walls. The staff were quickly on hand to talk us through the menu - letting us know what could be done vegetarian and being completely on top of vegan requirements (the vego dumplings have a smidgen of egg, while the delicious sounding eggplant special had fish sauce in it). They were happy to tweak a bunch of dishes for us, swapping and dropping ingredients so we had a good range of options. We decided to order everything we could all eat and share - basically an entree and four mains.

The entree was a steamed rice noodle roll with spinach ($13.50) - we got two serves, and the waiter happily divided them up into four little bowls for us. 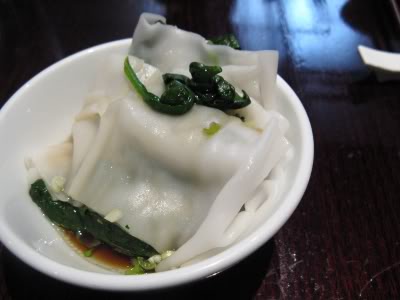 These were a great start - beautifully soft noodles, filled with spinach and sauced up nicely. flavours were not particularly strong, but I added a touch of the chilli sauce that they gave us, and was in heaven.

The first the mains was the most anticipated - ma po eggplant ($24, the waiter had decided that two dishes of tofu was too many, so he'd got the chef to make us an eggplant version of the ma po tofu). 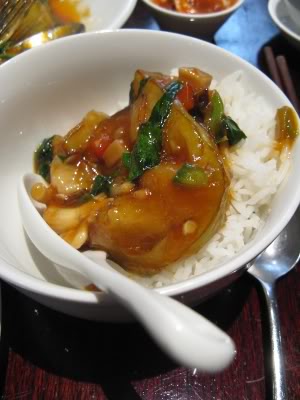 The ma-po was the dish Lisa raved about, and this didn't disappoint. The eggplant was falling apart soft, while the mushrooms, capsicum and other vegies provided a bit of textural variety. But this is all about the sauce - it's much different to our version, but wonderful nonetheless. Spicy without being painfully fiery, sweet without being sickly and rich without being gluggy. If you're a vego at Lau's, order this dish (with tofu or eggplant, either would be great).

The tofu dish we did try was the deep fried bean curd with mushrooms ($18). 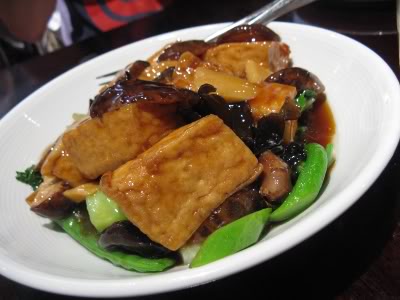 This was a nice enough dish, that suffered in comparison to the ma-po. The green vegies were fresh and crispy and there was a nice variety of mushrooms to accompany the big fried chunks of tofu, but the sauce was a bit lacking in inspiration - it was enjoyable without being particularly memorable.

Next up was the stir-fried seasonal vegetables ($17). 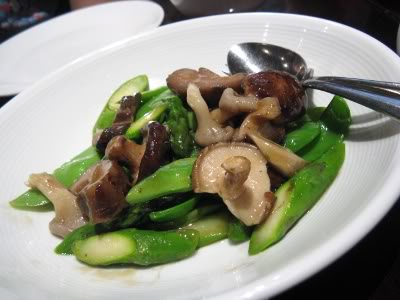 This came in a similar sauce to the deep-fried tofu and was basically the same dish minus the tofu and plus more asparagus and mushrooms. Again, everything was fresh and tasty, but it wasn't the most exciting way to spend $17 on food.

The last main on the list that was veg-adaptable was the Singapore noodles (minus the usual prawns and pork!, but still $24). 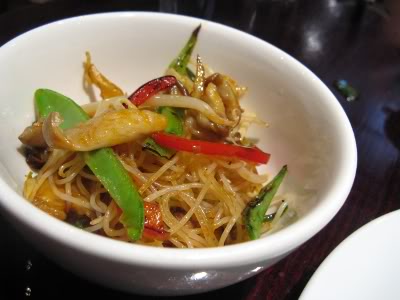 This had an nice spicy kick and was filled with fresh, crunchy vegies. The noodles were okay too (maybe a little overdone?), but the whole dish was a tad on the oily side. Still, it was probably my second favourite main of the night.

We left a little disappointed with Lau's - partly due to our high expectations. The combination of such a great pedigree (the guys running this place are the sons of the original Flower Drum owner) with a reputation for veg-friendliness had us expecting something spectacular. The ma po eggplant and the rice noodle rolls passed muster, but the rest of the food was just a tad underwhelming. Throw in some reasonably hefty prices and it's not somewhere we're likely to be hurrying back across town for.

Lau's Family Kitchen has been given positive reviews by everyone else who has blogged it, so maybe their meaty options are a bit more impressive - see: Melbourne Gastronome, Mel: Hot or Not, Jeroxie, Munching in Melbourne, I'm Hungry, 1001 dinners, 1001 nights, onnomnomnom, Delishaz, Tomato, Gastronomical voyage in Melbourne and tummyrumbles.

Environmentally-minded omnivores may be a tad concerned that Lau's sells Patagonian toothfish, which is on the Greenpeace red list and rated 'avoid' by Seafood Watch and the Australian Marine Conservation Society, suggesting it's not particularly sustainable.