For the third and final phase of the couscous experiment, I chose and adapted one of the recipes that was supplied with our promotional package of pearl couscous. Originally a "medley of mushroom and spinach with gourmet pearl couscous and bacon", I replaced the bacon with a vegetarian imitation, and the spinach with silverbeet.
In this recipe, the onions and mushrooms get sauteed before the couscous and stock are added. Once the stock has been absorbed, in goes the spinach/silverbeet and some grated parmesan, and on goes some grilled (faux) bacon. Based on our previous trials, it was pretty clear to me that product #3, the moghrabieh, was not going to come out of this well. Given the risotto-like nature of the recipe I decided to replace it with product #3a, arborio rice. Costing $2.49 for a 500g packet ($4.98/kg) at our local supermarket, it's at the cheaper and more accessible end of the products.
Let's kick off with the recipe, should you wish to try it at home.
____________
Experimental couscous risotto
(based on a recipe by Gabriel Gate in promotion of pearl couscous) 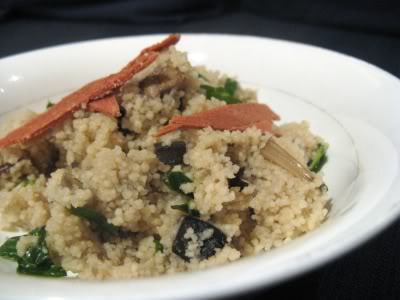 Product #1, the standard supermarket-sourced couscous, was of course the quickest to cook. The flavours of the mushroom and stock carried through nicely, but I didn't think it particularly suited the use of parmesan. 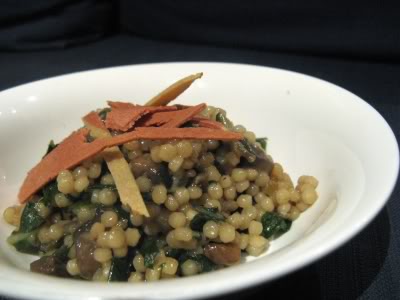 Product #2, the pearl couscous, should have been at a distinct advantage here since the recipe is intended for its use. Actually, it was our least favourite - the pearls have a smooth, slippery suface that just didn't meld with the cheese. 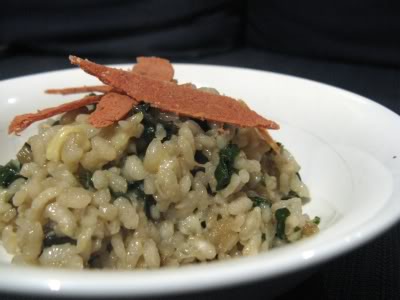 Product #3a, the arborio rice, took substantially longer to cook through than the pearl couscous. While the creamy texture was what we know and love from traditional risottos, this rendition was surprisingly bland. 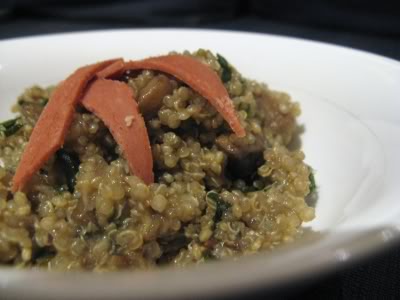 Product #4, the quinoa, took the longest to cook but was the greatest pleasure to eat. Though its chewy hulls were a far cry from the texture of conventional risotto, it had the deepest, most satisfying flavour. Interestingly, we weren't at all troubled by its combination with the parmesan.
____________
The couscous experiment - Conclusions

After trialling a few semi-comparable products on the market, we've not arrived at a single superior product. The Moroccan/North African couscous (product #1) is undeniably the cheapest and most convenient option, cooking up in just a few minutes. It absorbs flavours nicely but doesn't offer much to get your teeth into. By contrast, the new pearl couscous (product #2, which we received promotional packets of) has a bit more substance. It still cooks reliably in ten minutes, absorbs flavours well, and has a unique silky texture. It's great on its own and pretty good in soup, but we wouldn't recommend it as a novelty risotto ingredient. It's also at the pricier end of these items.

Products #3 and #3a, the moghrabieh and arborio rice, didn't really shine in these trials but I think they each have their place. Arborio is the traditional risotto queen, while some leftover moghrabieh soup hinted at what it can be at its best.

Quinoa (product #4) is probably the most nutritionally attractive of the bunch. It's pricey and takes some time to cook through, but the rewards can be great. With a nutty taste and chewy, bubbly texture it already has a lot of character of its own, yet it also pairs brilliantly with stock and the cheesy-risotto approach. I'd think twice, however, before adding it to another soup.

So while the new pearl couscous is probably worth a try, it doesn't completely outcompete the alternatives. It'll be a welcome addition to our rotation of starchy sides, though it probably won't reach the staple status that quinoa holds in our pantry.
____________

Take a look at the first and second installments of the couscous experiment.
Posted by Cindy at 8:24 am