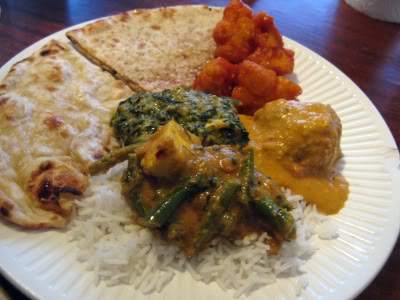 When Mike and Jo arranged to come over for a takeaway dinner and cards, Jo registered an interest in trying out Indya Bistro. Our first experience was certainly pleasant enough, and we'd received comments indicating that the menu has expanded since then. It has indeed - there've been a few alterations to the entrees (no more Mumbai fries!), while the number of main courses to choose from has almost doubled. If anything, it looks a little more like the typical Indian takeaway menu and a little less like a modern reinterpretation of Indian cuisine. Nevertheless, the unusual and irresistable gobi florets ($7) are still there - hooray!
The Diwani Handi Delight has been renamed the mixed vegetable sabzi and goes for $3 less ($15). It still tastes great, with Mike deeming it his favourite of the night. This is high praise, since all of us agreed that the paneer and spinach delight ($15, a long-term Indian favourite amongst the group) was probably the best we'd ever tasted - it was terrifically creamy and probably dreadfully unhealthy! The new malai kofta ($15, another of our Indian meal yardsticks) was also lovely. We mopped those thick, delicately spiced sauces with basmati rice ($4), garlic naan ($4) and kashmiri naan ($4).
On paper, I wouldn't have expected to become an Indya Bistro regular - the vegetarian options aren't too different from the norm and cost a few dollars more than usual. But they're easily the tastiest in the neighbourhood! Next time we're in the mood for Indian takeaway, we'll almost certainly be ordering it from Indya Bistro.
____________

You can read about our previous visit to Indya Bistro here.
____________
Indya Bistro now have a website: www.indyabistro.com.au.
Posted by Cindy at 10:53 am