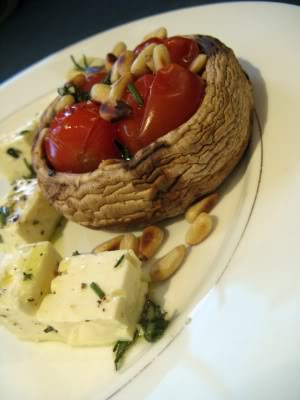 I dealt with October's calendar recipe only in the last few days of the month. While I knew I'd like these baked mushrooms - topped with cherry tomatoes and pine nuts and served with marinated fetta - I suspected they wouldn't well suit Michael's long-term tomato issues and newfound cutlery-operation challenges. This was pretty much the case, though we both enjoyed the meal more than I expected at the outset.
For the tomato-lovers amongst us, these are terrific. Cherry tomatoes get wedged into the large mushrooms and as they bake, the tomatoes' skins puncture while the flesh sweetens and almost melts. It nearly but not quite falls into the acceptable category of 'tomato sauce', with Michael compelled to set aside the last couple of tomatoes on his plate. At least he agreed that the marinated fetta was a winner - I used lemon thyme rather than the standard stuff and can highly recommend it. If I made these again, I'd use a little less fetta and crumble it over the tomatoes rather than serving it, uncooked, on the side. For the anti-tomato brigade, I'd be interested to try slotting in olives and whole garlic cloves instead. I'd probably add a splash of balsamic vinegar across the board, too.

Place the fetta cubes in a shallow dish. Sprinkle over the rosemary and thyme leaves, crack over some pepper, and pour over the olive oil. Allow the fetta to marinate for at least 30 minutes.
Preheat the oven to 180°C. Break off four pieces of baking paper, each roughly 30cm square. Put a mushroom at the centre of each one. Put four cherry tomatoes and a sprig of thyme on each mushroom. Sprinkle over some salt, pepper and a little of the oil from the fetta. Wrap the mushrooms up in the baking paper and bake them for 40 minutes. Unwrap the mushrooms and transfer them to plates, sprinkle over the pine nuts, and serve the fetta alongside.
Posted by Cindy at 9:26 pm