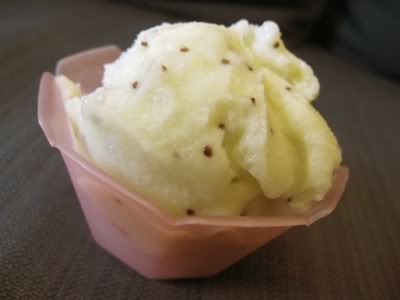 There were a range of excellent icecreams at the T-house potluck last month; among them was a kiwi gelato prepared by Toby. So when a couple of kiwi fruits turned up in our next vege box I didn't think twice about how we'd be eating them. I pureed them up into gelato within days and then, for one reason or another, didn't actually taste the gelato for about two weeks. Amazingly, after a few minutes resting on the bench, this gelato still had a terrific texture! It's lighter, smoother and frothier than any other sorbet I've made. It could be that I finally nailed the right sugar-to-water ratio or perhaps it's down to the corn syrup, which I've not used before. Either way, this refreshing sweet-sour ice won't last so long in the freezer next time, especially once the weather warms up.

Kiwi gelato
(based on a recipe at veganfood, via vegan potlucker Toby)

Stir the water, sugar and corn syrup together in a small saucepan, heating them gently until the sugar is dissolved.
Puree the kiwi fruits in a food processor. Add the lemon juice and zest and the sugar syrup and puree the lot.
Chill the kiwi mixture thoroughly and churn it in an icecream maker before freezing.
Posted by Cindy at 7:36 pm