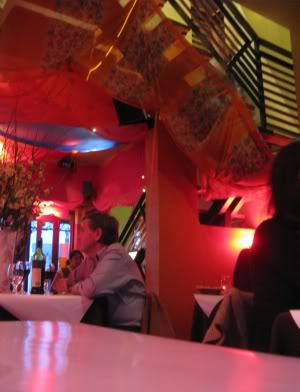 The Roti Man has been on Cindy's list of places to try since Stickyfingers gave it the thumbs up 18 months ago. We've not really had a reason to trek across the river to try it out, and have been well occupied sampling local Indian fare. With a night out in St Kilda on the cards and a general enthusiasm for Indian, we did a quick check of the tram maps, happily discovering that the 96 runs straight past Middle Park on its way to Fitzroy Street, making The Roti Man an easy stop off. We didn't have any trouble scoring a table without a booking at around 8 on a Friday night, but things were reasonably busy (and noisy) the whole time we were there. And you can immediately see why: The Roti Man has a colourful attractive vibe, friendly staff and an impressive-looking menu.

Cindy ordered her customary mango lassi, which was one of the most visually striking that I'd seen, but probably not the wisest choice given the rich curries that we ended up ordering. 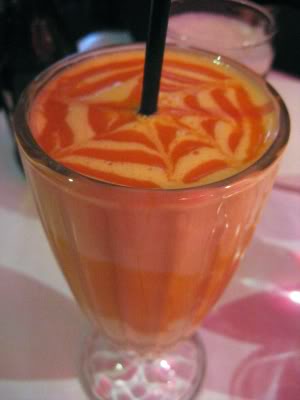 Cindy ordered probably the least lassi-appropriate meal on the menu: Dum Aloo Kashmir ($14.50), potatoes and onions stir-fried in a wok with a delicate dry roasted spice mix of cardamom, fennel and cinnamon and other selected spices and simmered in a cashew nut creamy yoghurt sauce. This was an incredibly rich and mild curry, with just enough spice to stop it from being overwhelming. Cindy loved it - a nutty, creamy potato-based curry is a recipe for Cindy's approval, and the sprinkling of dried fruit was a nice touch (although the cherries were a bit weird). I had a few spoonfuls and agreed with Cindy's appraisal - this is an excellent dish, but I think it would be too much for me to get through on my own. 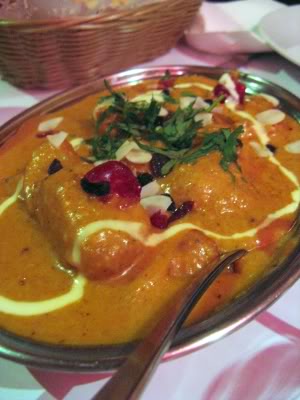 I went for something a bit sharper, the Kadai Paneer ($14.50), home made cottage cheese with onions, tomatoes and capsicum in a tomato based sauce. This had a bigger kick than Cindy's curry, and it was a nice change to order a paneer that wasn't in a saag sauce. If anything, it could have used a bit less capsicum - the flavour started to dominate by the time I'd worked my way through the dish, but I was still pretty satisfied. 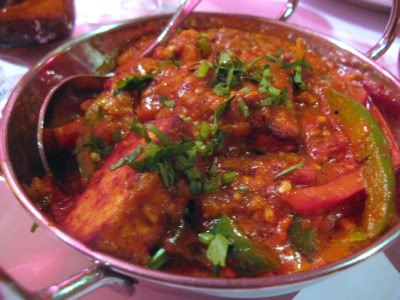 We couldn't visit the Roti Man without sampling some breads, so we ordered a serve of coriander paratha and a serve of garlic naan. 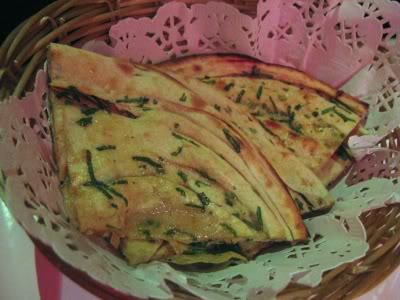 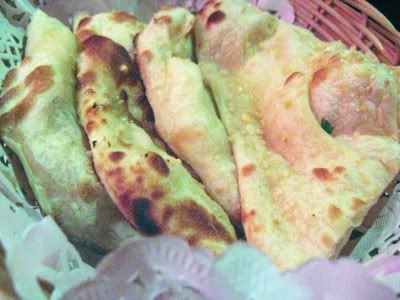 Cindy was pretty impressed by the coriander paratha, and I enjoyed the flavour combination, but realised that I'm not really a fan of paratha - I much prefer the softer naan and roti breads. The garlic naan hit the spot, but didn't scale the heights of our previous southside Indian experience. Perhaps I should have ordered the eponymous roti.

Still, this was a fine Indian experience - a kind of middle ground between the cheap local curry shops and the slightly more upmarket Indya Bistro. It's not exactly convenient, so it may be a while between trips, but The Roti Man has shot towards the top of our options for eating out the next time we're heading off to the Prince or the Palace.