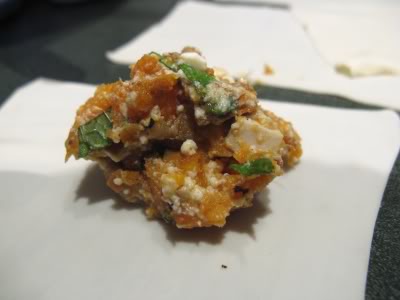 I don't think I mentioned that one of the prizes I received at the annual lab culinary competition was the biggest sweet potato I have ever seen. Some of it was transformed into sweet potato and adobo pies, and plenty more was simply diced and roasted with olive oil, salt and pepper. I put the final half-kilo to work with some other leftovers - smoked tofu, silken tofu, mint, gow gee wrappers and puff pastry - to make some gently sweet, sweet potato snacks. 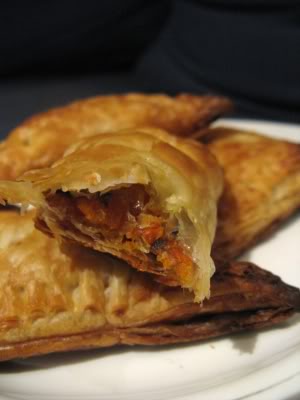 In one of her recent posts, Kathryn (of Limes & Lycopene) noted what a difference a long, slow saute makes in bringing out vegetables' sweeter side. She's right - it's the most important part of the silverbeet and celery gratin I recently devised, and it's the starting point here. You need to slowly, gently cook the onions until they're golden and caramelised, meanwhile baking the sweet potato chunks until they have a similarly caramel crust. Cinnamon and nutmeg enhance the sweetness, smoked tofu extends the flavour, while the silken stuff acts as a creamy binder. Inspired by those pumpkin ravioli, I added mint for a bit of lift. 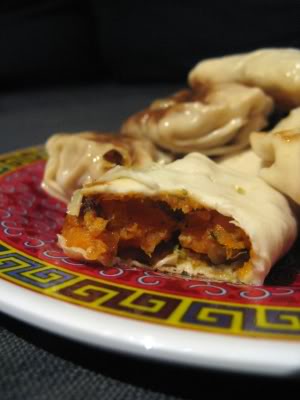 The result was rather fine indeed. I packaged some up into puff pastry parcels, which were are doubly delicious with some pesto on the side. The rest became potsticker dumplings, dipped into a variant of the lemon agave sauce.

Preheat an oven to 180°C, then get busy with all the chopping. Put the diced sweet potato on a baking tray, drizzle it lightly with olive oil and season with salt and pepper. Bake the sweet potatoes, tossing them occasionally, until they're soft and just start to caramelise, about 30 minutes.
While the sweet potato is baking, gently saute the onion in a frypan, with a little more oil and salt. Stir the onion around regularly until it's caramelised but not burned, about 15 minutes.
In medium-sized bowl, mash the silken tofu with a fork. Add the sweet potato and lightly mash it too, making sure it keeps some of its texture. Stir in the onion, smoked tofu, cinnamon, nutmeg and mint.
Use the mixture to fill pastries, dumplings, ravioli, cannelloni or anything else you can think of.
Posted by Cindy at 3:57 pm