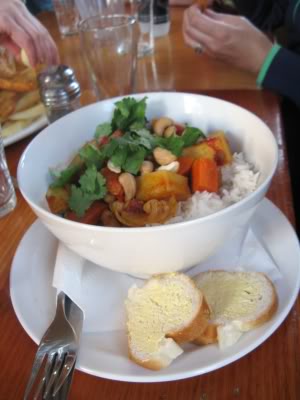 Some of Cindy's workmates have recently kick-started a fortnightly pub-jaunt that we're periodically heading along for (see, for example, our trip to The Gem). This time around we all headed north to The Lomond in East Brunswick.

The Lomond has been positively reviewed by a couple of meat-eating bloggers, but one of them was of the slightly upmarket restaurant tucked away out the back and the other didn't sample anything meat-free. Our pub-club is less about table cloths and more about fried food and front-bars, so we opted for the casual vibe by the pool tables. The bar menu is pretty veg-friendly, with five meals to choose from. We eschewed the stir-fried vegies with couscous and harissa ($12) and the fattoush salad with warm chickpeas ($14), instead opting for dishes that were seemingly vegan (I must admit we didn't check though).

I ordered the spicy chickpea, potato and cashew hot pot with steamd rice ($15, see above). This was warm and filling, but not particularly flavoursome - it felt like something we could throw together at home without too much bother and was a little overpriced for what it was. 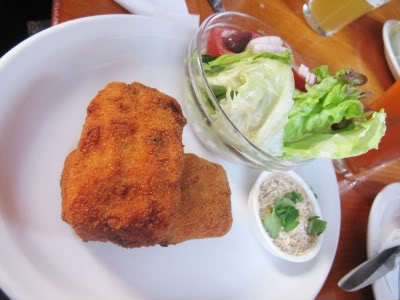 Cindy's croquettes were appropriately deep-fried (which is what you go to the pub for really isn't it?), and came with an ineresting coconut sauce on the side. Again though, they were a little bland, so despite their textural excellence, Cindy was not particularly impressed. It's worth noting that someone else at the table ordered the twice-baked goats cheese souffle, and it was deemed a great success, so maybe we just ordered poorly.

The front-bar at the Lomond has a very laid-back vibe (especially when there's some sort of lesbian pool competition going on, as there was on the Monday we visited), which is apparently a long way from the atmosphere in the restaurant. We had fun kicking back casually around the table but seemingly the food isn't a high priority in the bar (even our non-veg friends were a bit disappointed) so it might be worth braving the tablecloths if you're after a meal.