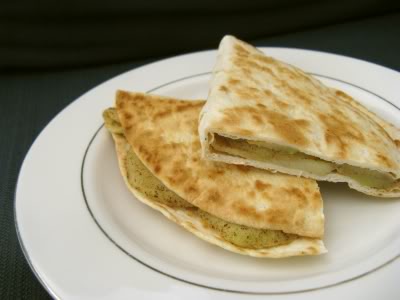 I pulled this recipe out of our Moosewood cookbook last Saturday. As I understand it, queso means cheese but there's no cheese involved here at all! Rather, these 'quesadillas' seem to be named after the process of filling, folding and frying tortillas. They're stuffed with a sweet apple-cinnamon mixture, making them an easy alternative to apple pie when you're in need of comfort food on a wintery night in.
I forgot to add the directed maple syrup to the apple mixture but didn't miss it at all. The apples are supposed to be cooked in butter, but I bet margarine would make a fine vegan alternative. And now that I've mentioned cheese, I'd love to try swapping out the cinnamon for some sharp cheddar for a more savoury snack.

Apple quesadillas
(based on a recipe from Moosewood Restaurant New Classics)

Peel and core the apples, slicing them into flat pieces. Place the apple slices in a large bowl and toss through the lemon juice and cinnamon. Don't worry if the cinnamon is well-mixed, it will be by the time the apples are cooked!
Melt the butter/margarine in a large saucepan or frypan. Arrange the apples across the bottom of the pan and cover them, cooking them for 5-10 minutes. Rearrange them occasionally so that they're evenly cooked, removing them from the pan when they're tender but still firm enough to hold their shape. Stir through the maple syrup, if you're using it.
Heat a frypan and lightly spray it with oil. Place a tortilla in the pan and cook it on one side for a minute or two, before flipping it over. Arrange one third of the apples over half of the tortilla and leave it all to cook for another minute. Fold over the empty tortilla half and transfer the quesadilla to a plate. Repeat with the remaining tortillas and apple mixture.
Posted by Cindy at 8:47 pm