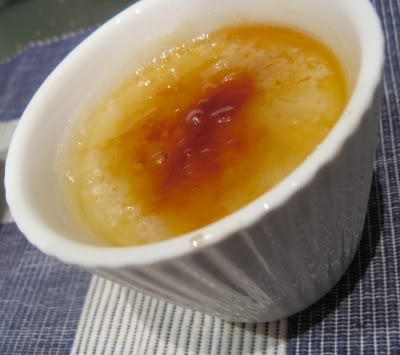 For many years, the words 'crème brûlée' just made me think of the daggy and wistful has-been (or rather, never-was) Les McQueen from the League of Gentlemen. But when I saw a novel rendition of this dessert in Leigh Drew's Vegan Indulgence and imagined serving it in still-warm ramekins, I put it on Sunday night's vegan winter menu. It was always going to be a high-risk venture, and I managed to make it extra difficult for myself.
Leigh gives directions for making about 2 cups of almond milk and supplements this with a further 2 cups of soy milk. Not being a big fan of soy milk, I thought I'd skip straight to buying a litre of almond milk and proceed from there. Only I couldn't find almond milk at the unfamiliar supermarket I was visiting. Instead I decided to buy rice milk, which has a natural sweetness that I thought could work here. Actually, once I'd made the custard and sampled the saucepan's leftovers, I didn't care for the aftertaste of the rice milk at all! While Michael protested that the rice custard was OK, I prepared myself for binning the lot and congratulated myself on purchasing some just-in-case vegan chocolate.
The recipe quantity allowed me to make one extra custard, so I rehearsed the sugar caramelising process on Sunday afternoon. In short, it was a mess. Brown, bubbly and gooey, my brûlée looked more like a swamp sample than anything you'd want to eat. But I developed a new theory or two during the process, and I reminded myself that this night's guests were the kind to appreciate an experiment and forgive a disaster dessert... especially if I could follow it up with chocolate.
And what do you know? I totally pulled these off! The key seems to be the shortest, hottest caramelisation process you can manage - heat up the grill completely before putting these in, pull them out as soon as they brown, and give them a good 5-10 minutes for the sugar to harden. Cross your fingers and it just might end up being the dish that everyone's still talking about days later.

I got so worked up about the custard flavour and toffee texture that I forgot to fret about using agar agar - thankfully it worked a treat, producing a smooth set custard that wasn't rubbery. I'm a little curious about Leigh's use of both cornflour and custard powder - custard powder is little more than cornflour and sugar, so I'd be tempted to sub it out for its main constituents if I made this again. (On the other hand, I now have most of a box of custard powder to use up...)

Les' nostalgia trips have been overtaken. Now the words 'crème brûlée' will have me thinking: problematic, possible and still to be perfected.

In a medium saucepan, stir together the milk, vanilla and agave. Sprinkle over the agar agar and set the mixture aside for 10 minutes.

In a small bowl, mix together the cornflour, custard powder and water until the powders are dissolved.

Put the saucepan of milk over medium heat and bring it to the boil. Once it's boiling, whisk it thoroughly for a couple of minutes. Whisk in the cornflour mixture and allow it all to simmer for half a minute. Remove the custard from the heat and continue whisking it for a few more minutes as it thickens.

Pour the custard into ramekins, leave them to cool at room temperature for half an hour, then cover them with foil and store them in the fridge for 24 hours.

When you're ready to serve dessert, heat up a griller as hot as you can. Sprinkle a teaspoon of sugar over each ramekin of custard and put them under the grill, a few at a time. Heat them until the sugar melts and remove them as soon as the sugar has browned. Allow the custard to cool and the toffee to harden before serving.
Posted by Cindy at 8:00 am