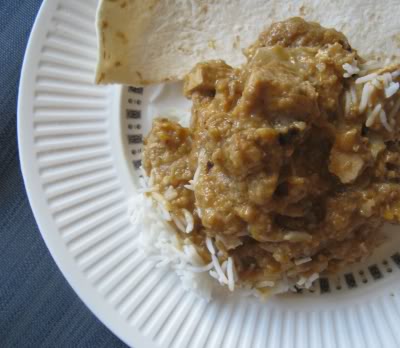 The second course of our vegan feast came courtesy of the Fatfree Vegan Kitchen, although it was a far from fat free recipe: Tofu, tempeh and pumpkin in peanut mole. One of our guests is always chasing more protein in his meals, so we thought that a stew containing both tempeh and tofu would be a sure-fire success. And it was, but not just because of its high protein. This has a rich and complex flavour - the peanut butter gave it a nutty saltiness, the pumpkin a mild sweetness and the spices a warming... spiciness. We made some minor changes from Susan's recipe - predominantly thanks to our lack of either a slow cooker or the organisational prowess to have food ready hours in advance - but everything worked out well and a hearty, warming feast was had by all.

De-seed the dried chillies, chop them up and soak them in 1/2 cup of the vegie stock to soften for about half an hour.

Saute the onion for about 7 minutes, until it browns slightly, and then add in the garlic and saute for another minute.

Whie the onion is frying, grind up the all-spice, peppercorns and cloves with the cinnamon.

Put the fried onion and garlic, ground spices, soaked chillies (along with their soaking stock and the rest of the stock), tomatoes, salt, peanut butter, bread, chipotles and adobo sauce into a food processor and blend until you've got a reasonably smooth paste. We just managed to squeeze it all into our food processor - it may be worth doing it in batches.

Heat some oil in a large saucepan over a low heat. Add the tofu, tempeh and pumpkin cubes to the pot and then pour the sauce over them. Stir everything together and simmer gently for about half an hour. We let ours go a bit too long and the pumpkin basically broke down and became part of the sauce. Not that this was really a big problem.

Before serving, stir through the sugar and add more salt if required. We served ours up over rice and tortillas, but you could also use delicious naan or roti breads.
Posted by Michael at 8:00 am