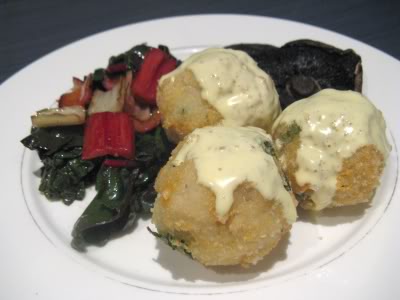 The next wintery recipe submitted to our giveaway turned up as an email rather than a comment - Megan sent us arancini with lemon mayonnaise. Stuffed with butter and two kinds of cheese, deep-fried and topped with that mayo, they provide immense short-term pleasure while probably taking a year or two off your life. In a bid to counteract the richness, I served them up with sauteed rainbow chard (so pretty! and not actually bitter!) and whole portobello mushrooms. 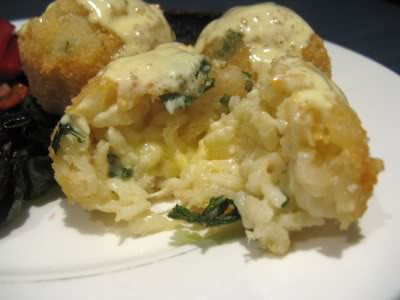 When I read that I'd be stuffing these risotto balls with cheese, crumbing and deep-frying them, I was prepared for trouble. This is exactly the kind of food I prefer to order from a cafe than cook for myself. I was astounded at how easily it all came together - the rice balls actually held their shape, and though the crumbing stages were messy, my arancini continued to hold their own in the bubbling oil. Nevertheless, they do take some effort - you'll need time and patience to pull these off unscathed.
It was actually the mayonnaise making, which I've done before, where I came unstuck. It just would. Not. EMULSIFY. I've previously learned that this can be a problem in humid conditions (see: the Potato Salad Incident of the Cairns Christmas in '06) but it seems unlikely to have been my problem here in dreary dry Melbourne. After some whinging and foot-stomping and declining Michael's suggestion that we "just use it as it is", I was about to dispose of my 'mayonnaise' when Michael suggested adding some cornflour. It seemed crazy and unlikely but why not try if it's getting tossed out anyway? A pinch of cornflour into the food processor did actually thicken up this mess of a mayonnaise, and we went ahead and poured it over the arancini. With a very acidic edge, it had just the flavour (if not texture) to complement that gooey, cheesy centre.

Pssst - if you're vegan and have made it this far through the post, have we got a reward for you! Coming very soon are recipes from a recent vegan dinner party, in three delicious installments.

In a food processor, thoroughly blend together the egg yolk, mustard, salt, pepper and cayenne. With the blade still going, slowly pour in the oil, cross your fingers, and hopefully the mayonnaise will thicken. Add a pinch of cornflour if you are absolutely desperate. Blend in the lemon juice and boiling water, then refrigerate the mayonnaise.
Bring the stock to the boil in a medium saucepan, then add the rice, salt and pepper. Bring it all back up to the boil, then simmer the lot for 15 minutes. Set it aside to cool.
Grate half of the parmesan, then stir it and the parsley through the cooled rice.

Slice the remaining parmesan, mozzarella and butter into 8 cubes each. Lightly squish one parmesan, one mozzarella and one butter cube together. Spoon out roughly an eighth of the rice mixture and form it into a ball around the cheese glob. Put it on a plate and and repeat the process to make 7 more arancini.
Set the flour, egg white and breadcrumbs out in shallow bowls. Dredge the balls in turn through the flour, then the egg white, then the breadcrumbs.
Heat the vegetable oil at least an inch deep in a saucepan. Deep-fry the arancini in small batches until golden, shifting them around with tongs for even cooking. Rest them on absorbent paper until they're all ready.
Serve the arancini with the lemon mayonnaise poured over or on the side as a dipping sauce.
Posted by Cindy at 8:31 pm