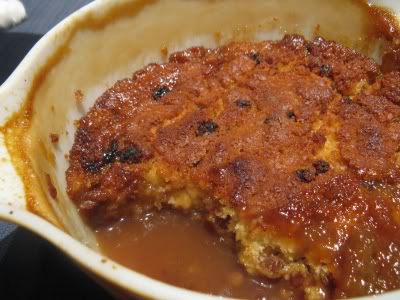 I was a little surprised that our recent request for warming winter recipes didn't yield any comforting desserts! Never mind - that other regular feature, the Calendar Recipe, provided just the thing for July. I'm not familiar with duffs and a brief browse around the internet hasn't got me knowing them much better - they seem generally to be steamed or baked puddings, though they might also be cookies or pastries.
This particular recipe had me wondering if duffs are a product of hard times: it's egg-free and contains very little butter (though other online versions contain plenty of both). There is admittedly plenty of sugar involved, yet the sweetness comes equally from sultanas. What I found most unusual about the recipe was its consistency as I prepared it. The dough is quite stiff, like a biscuit dough, and sat barely an inch deep in my casserole dish. Meanwhile the butterscotch sauce is extremely watery and much larger in volume than the pudding dough! Over the hour that it baked, the dough absorbed much of the liquid and the butterscotch sauce thickened. The pudding rose almost to the top of the dish before subsiding again as it cooled (check out the tide lines in the photograph above!).
So, this duff here is essentially a self-saucing pudding. The cake is quite coarse (presumably from the lack of fat) and becomes quite tough as it cools so is best eaten freshly baked or patiently reheated. However the sauce and dried fruit provide plenty of moist sweetness - any sultana lover will be pleased to dig into this on a cold night. 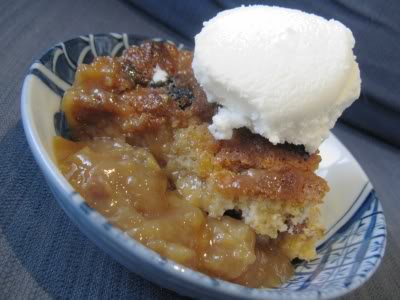 The recipe recommends serving the duff with ice-cream or vanilla custard. Instead I decided to try the vanilla frozen yoghurt from The Perfect Scoop - it's a ridiculously simple mixture of natural yoghurt, sugar and vanilla. While I loved the flavour, this iced confection came out a little powdery and not quite scoopable. Still, there's plenty of weeks ahead to perfect this for summer, right?

Preheat the oven to 180°C and grease a large casserole dish.

Sift together the flour, baking powder and salt. Stir through the sugar and raisins, then mix in the milk to form a stiff dough. Spread the dough evenly over the base of the casserole dish.

Stir together the brown sugar, butter and boiling water until the sugar has dissolved and the butter has melted. Gently and slowly pour it into the casserole dish. Bake the lot for 45-60 minutes, until the pudding is cooked through.

Thoroughly stir together the ingredients in a bowl, until the sugar has dissolved. Chill the mixture for an hour or two before churning it in an ice-cream maker according to the manufacturer's instructions.
Posted by Cindy at 8:00 am