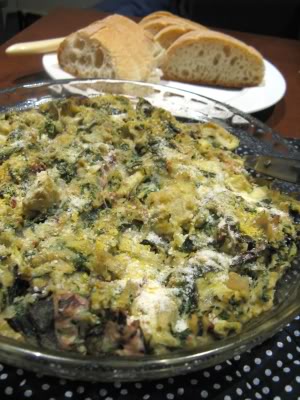 Michael and I invited a few friends over for a vegan evening meal and kicked things off with this creamy spinach-artichoke dip from Yeah, That "Vegan" Shit. Actually, ours was a creamy spinach-artichoke-chard dip thanks to our Green Line box. I was inordinately excited by the idea of a serving a baked dip in winter, and this one was exactly the comforting appetiser that I was hoping for. It'd make a great lunch, just scooped onto crusty bread. 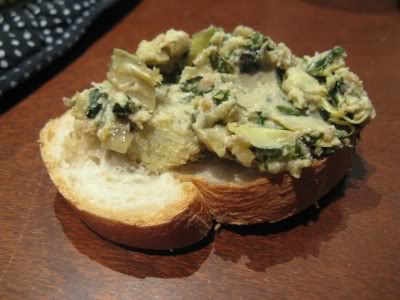 This is the kind of recipe where soy cream cheese is at its best. In combination with blended cannelini beans and yeast flakes, it provides a rich savoury base without any of the odd aftertaste it can have on its own. The flaky texture of the artichoke hearts is a little like tuna, and the greens prevent it all from becoming too bland and flabby. This is one of those dishes that you'll barely believe is vegan, terrific for sharing with a crowd of mixed eaters.

Baked artichoke dip
(adapted very slightly from Lindy Loo's version, which itself was inspired by the Don't Eat Off the Sidewalk! zine)

Heat the oil in a frypan, drop the onion in and cook it until the onion is nearly translucent. Add the garlic and cook it all for a further minute. Add the chard, cooking until the leaves just start to wilt, and then the baby spinach leaves. Cook until the spinach is also just wilting, then take the pan off the heat and set it aside.

Plonk the cannelini beans into a food processor and blend them until smooth. Transfer them to a casserole dish and stir in the vegan cream cheese. Add the pan-fried greens, artichoke hearts, rice crumbs and yeast flakes and stir everything until it's roughly combined. Spread the dip out evenly across the dish, then sprinkle over more crumbs and nooch if you want. Grind some black pepper over the top.
Cover the dish and bake the dip for about 20 minutes. Remove the lid and bake for a further 10-15 minutes, until the top begins to brown just a little.
Posted by Cindy at 8:00 am