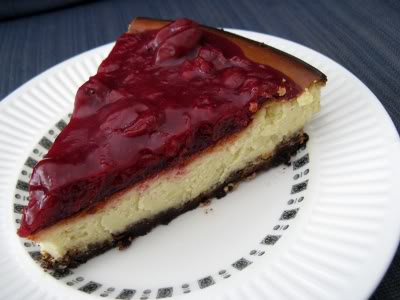 I was recently hit with a hankering for some home-made dessert, something Michael and I could enjoy on the couch after work while watching our latest TV fave (Misfits, for the record. Please spare me your spoilers!). As I browsed through my bookmarked recipes I kept a particular eye out for VegMel recipes and sent through a shortlist to Michael. He chose this cheesecake.
Its origins actually lie with Gourmet Magazine and Smitten Kitchen but it's appeared on three VegMel-syndicated blogs: Gretel was getting fatter, then in vegan form on easy as vegan pie and Vegan About Town. My version was neither vegan nor gluten-free, but some small substitutions could render it both these things. 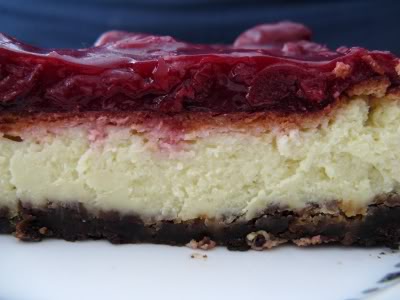 My small step in remixing the recipe was using chocolate biscuit crumbs for the base, a hint at my weakness for Cherry Ripes. It wasn't quite as chocolatey as I might have liked and I'd consider adding some extra cocoa powder to the crust in future.
I also portioned my cheesecake a little more modestly, using two thirds the original crust and topping quantities and about half the filling. This wasn't enough crust to work up the sides of my springform tin (or perhaps I didn't grind the biscuits finely enough?) and I overcooked the cake a little (check out the dark brown cake at the back end of the top photo).  It was still velvety soft and dense in the middle, with a nicely set but not too jelly-ish cherry layer on top. A couple of nights after we polished it off, I was caught off-guard by an intense craving for just One. More. Slice.
You've been warned.

Baked cherry-chocolate cheesecake
(adapted from Smitten Kitchen, who credits Gourmet Magazine,
with thanks to Gretel was getting fatter, easy as vegan pie &
Vegan About Town for inspiration)
It's getting sent to 'that recipe seems very familiar...', naturally!


To make the crust, stir together all the ingredients and press the mixture onto the bottom of a springform pan. You're supposed to work it up the sides as well but I didn't think I had enough. Pop it in the freezer while you make the filling.
Preheat the oven to 250°C. In a medium-large bowl beat together the cream cheese, sugar, flour and lemon zest until smooth. Add the eggs, one at a time, on low speed. Beat in the vanilla. Scrape down the mixture on the sides of the bowl as you go.
Line the springform pan with some foil on the outside, and place it on a large baking tray. I put a bit of spray-oil in the side of the pan, but I'm unsure that this is necessary. Pour in the filling and start baking. After about 20 minutes the cheesecake should puff up and go a bit golden-brown. Don't leave it too long! Proceed to the next step as soon as you see a bit of colouring. Turn the oven down to 100°C, then continue baking until set but still a little wobbly in the centre, about another 20 minutes. When the cheesecake is done, run a knife around the sides to loosen it from the pan, then leave it out to cool. Refrigerate it even, if you have the time.
To make the topping, place all the ingredients in a small saucepan. Bring them to the boil, then turn the temperature down a little and cook them for a couple minutes more. Allow them to cool a bit before spreading them over the cheesecake.
Refrigerate the finished cheesecake for as long as you can stand it before eating.
Posted by Cindy at 7:35 am