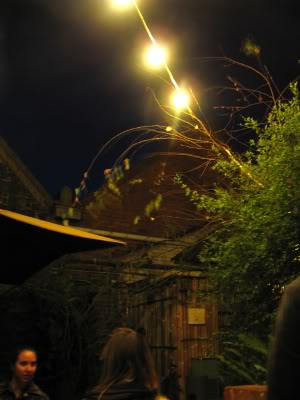 We ended up cramming our Sunday pretty full: breakfast at Lord of the Fries, a wander through the ACMI Movie Show exhibition, lunch at Northern Soul and Women of Letters all followed up with our semi-regular pub-club. As the organiser, I'd chosen the Wesley Anne as much for our post-Thornbury Theatre convenience as for any real expectation that the food would be that great. We enjoyed the atmosphere when we first visited but the meals we'd ordered then and on a subsequent trip were pretty average.
The inside of the very impressive building (it's an old church and has a beautiful high ceiling and some lovely booths tucked at the back) was heaving with people when we rolled in at about 5:30 so we took refuge in the beer garden. The outside area is an odd assortment of tables and chairs that has a kind of ramshackle charm. Except when the wind whips through it, when it is freezing and charmless. Having quickly grabbed a vacated table right next to the fireplace, we were able to peruse the menu.

The Wesley Anne folks do a good job of menu-labelling, with lots of dishes having a little 'v' or 'gf' after them. They offer one vegan option (a delicious-sounding smoked-tofu salad) and loads of fairly cheese-heavy vegetarian dishes.

I hummed and hawed for a while before settling on a fairly standard pub meal: mushroom gnocchi (ricotta gnocchi with Swish brown mushrooms, asparagus and pecorino, $19). This was a surprising success - I was expecting a bowl full of slightly gluggy gnocchi pieces with a couple of mushrooms and may 2 spears of asparagus. Instead, there were at least as many vegetables as there were bits of gnocchi and the pasta itself was hearty without being stodgy. The rich mushroomy sauce soaked into everything, giving it all a warm earthy flavour. Not bat at all.

Cindy combined two entrees: the carrot fritters with raita and fresh coriander (gluten-free, $11) and the truffled macaroni and cheese ($7). The fritters were great - little bites of crispy-crusted deliciousness, given a nice spark by the oodles of fresh coriander stuck on top of each one. 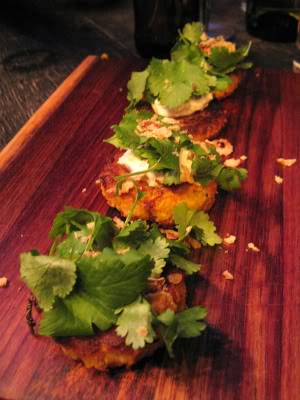 The mac and cheese had a nice crispy top and added a hint of truffle oil to the standard mac and cheese mix. It didn't have quite the refinement of either of the other two dishes we ordered but it was good hearty comfort food and Cindy happily polished it off. 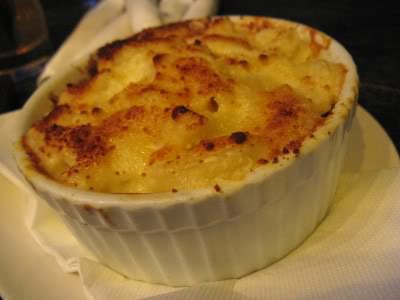 We were pleasantly surprised by our dining experience at the Wesley Anne - either things have improved in the last four years or we just had a lucky night. The staff are a bit on the unhelpful side but the food came out quickly given the number of people they had in. They've got a good array of beers on tap and if you can snag somewhere near the fire (or one of the few gas heaters dotted throughout) the beer garden is a lovely place to enjoy a Sunday evening meal.
____________
You can read about our first visit to the Wesley Anne here. Since then, Fitzroyalty and Foodscrazy have given it the thumbs up while Eat, drink, stagger and The Tasty Dozen were a bit disappointed.
____________
Wesley Anne
250 High St, Northcote
9482 1333
veg entrées $7-14, mains $17-20
http://www.wesleyanne.com.au/

Accessibility: Pretty poor. There's a step or two coming in and then a pretty dim and crowded interior. The toilets are small and a bit awkward (though they are unisex it seems).
Posted by Michael at 9:24 am