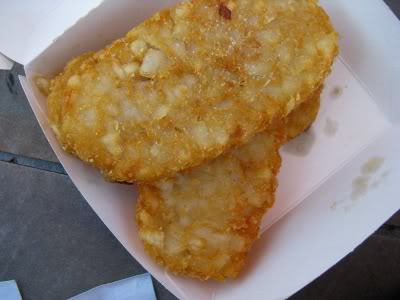 Lord of the Fries has offered breakfast on and off (though more off) for years. We were first aware of them advertising it back in 2008, but that was only on weekdays and we couldn't make it in. Breakfast returned in 2010 but had disappeared again by the time it was reported on In the Mood for Noodles. This last month Lord of the Fries introduced a new breakfast menu, available all week long before 11am at its Flinders Station and Melbourne Central stores. The menu has already been reviewed on crosslegged on the front lawn.

There are three brekky buns on offer - the Melbourne (egg, mayo, cheese & mustard), the Bombay (curry egg, chilli, cheese & spicy mayo) and the Tibet (tofu, cheese, mayo and mustard - actually all vegan). There's optional tomato (50c) and soy bacon ($1), and there are fliers floating 'round right now offering the bacon at no extra charge. There are also coffees, hot chocolates, hash browns and meal deals. 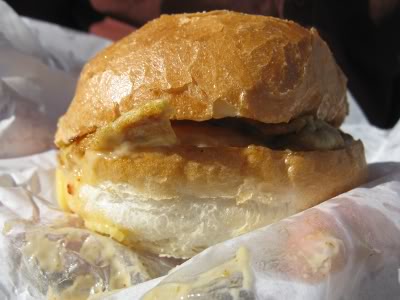 We dabbled in a little of everything except the beverages. The hash browns ($1.25 each) were exactly what you'd expect - very oily and salty, and thankfully hot and crisp too. The burgers ($5 each) are neither pretty nor informative to look at so I won't trouble you with photos of both! Michael enjoyed his Bombay with bacon - it was junky, saucy and he commented that the bacon provided the only variation in texture. I was less enamoured of my Tibet with tomato. Like Danni, I couldn't taste anything beyond the mustard and mayo.
I wouldn't proclaim the Tibet worse than the Bombay - I suspect that Michael and I just have different tastes. For me, this isn't breakfast food. Hopefully it'll hit the spot for any vegos out there harbouring nostalgia for the McMuffin. There's no judgement here.
____________
We've explored the Lord's post-breakfast menu pretty thoroughly, more than the one, two, three, four, five times we've blogged it! Since then they've given us a VIP card but we paid full price for the food blogged above.
____________
Lord of the Fries
Flinders Street Station, Melbourne CBD
veg brekky bits $1.25-$8.50
http://www.lordofthefries.com.au/


Accessibility: This takeaway store is located on a flat wide footpath and has a high bench for ordering, paying and picking up food.
Posted by Cindy at 8:59 am