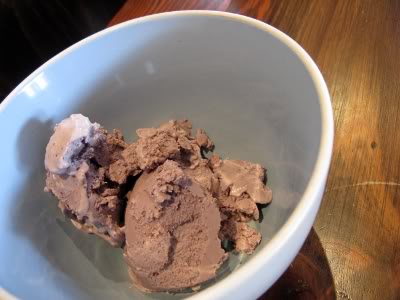 This black rice icecream was the rich finale to our Bali-inspired banquet. I was very pleased for the excuse to try something from the icecream section in Sri Owen's Indonesian Food, which is influenced as much by her travels to Italy as her country of birth. Between my pantry constraints, time constraints and vegan constraints, the recipe I've written below departs quite a bit from the original but is still pretty good.
For starters, there was no question that I'd be replacing the dairy. With so much coconut milk in the original recipe I didn't hesitate to take it all the way. My bigger challenge was locating black glutinous rice in my neighbourhood. None of my weekday haunts had any, and it was 3pm on Saturday by the time I brought a bag home from the Asian grocery near the Queen Victoria Markets. I slashed the rice soaking time by two thirds and the simmering time by another third, needing the mixture to be back in the fridge before we headed out for birthday party. As a consequence my rice was soft but not porridgy, and I decided to strain it out.
Even strained, this icecream was a rather fetching mauve, with a very gentle sweetness from the coconut and rice as much as the palm sugar and agave. I'd like to make another batch, giving the rice the full time it wants, to taste it at full rice power.


Cover the rice with cool water and let it soak for 2 1/2 hours (original recipe has 4-8hours so go longer if you can!). Drain the rice and place it in a saucepan with the coconut cream, coconut milk, salt, cinnamon and palm sugar. Bring it all to the boil, then keep it on a high simmer for an hour, stirring regularly. (The original recipe had a 1 hour 35 minute simmer, bringing the well-soaked rice to a thick porridge.) My rice was still very granular, but also very tender. Refrigerate the mixture until completely cold, about 4 hours.
Transfer the mixture to a food processor and add the agave nectar. Blend until as smooth as possible. Optionally, strain out the rice (I did). Churn it in an icecream maker according to the manufacturer's instructions, then freeze until firm.
Posted by Cindy at 7:57 am